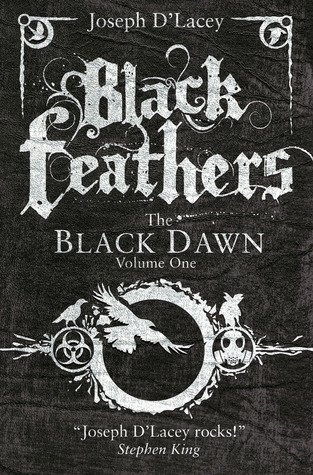 “When the final days came, it was said that Satan walked the Earth in the guise of a crow. Those who feared him called him Scarecrow or sometimes Black Jack. I know him as the Crowman”

This excerpt is from the very first line of the novel.

With regard to this creature with black feathered wings and sharp lethal beak I have had many a harrowing encounter. There was, let me mention first, this movie The Birds by a master of the dark Alfred Hitchcock and then there was appearing of this black feather creature many times in The Stand by Stephen King a master-craftsman storyteller of the macabre. To top it all one day of a winter month driving my car, stooped at a red light, I see to my right on a patch of grass two crows attacking a beautiful cute squirrel mercilessly, it had no joy in escaping the onslaught of this creatures of death, these symbols of doom.

Now to bring you to the attention of this story aptly titled Black Feathers I feel a conspiracy brewing here and the markings of the darkness rising the Crowman cometh. This being a story of fiction I agree has no resemblance in the realm of the real world I know but low and behold I cant helpeth, I seeth the signs of the darkest days riseth upon us all.

Now to this wonderful captivating tale set in a world plagued and strife with unrest, social disorder, crime, and debt ridden. There are two gleaming diamonds among the rough from two different families who are to lead and have a part in the destiny of the earth and in its darkest days a key importance in the order of the world. One is a boy, Gordon, not yet reached adulthood that finds that he is on the run due to certain desperate and deadly circumstances, he runs from the Wardsmen, another menacing presence of the macabre.

The other main important character in that of a girl, Megan, she has been taken under the wing of Mr Keeper he is to guide her on a road, the likes of magic and the surreal.

Then finally the star of the show the Crowman when and how will he come the story shall divulge you of this knowledge, It is not often the denizens of a town have the Crowman visit, sometimes people refer to him by the name of Black Jack or the Scarecrow.

There are many images of the macabre painted with words in this tale land stricken terrified by disaster and the end of days ahead but there shall be some light for the people are in need of saving.

The author has done well crafting great characters and having the reader feel the scenes in showing the turn of events in his great writing. I still remember his successful tale of macabre Meat and as Stephen King said about that novel “Joseph D’Lacey rocks!” I am sure he would say the same and give a nod to this novel.

Megan and Gordon’s’ destiny is set in motion and to be fulfilled they are to see the dark days that befall the world ahead, the reader will learn of their part in the workings of this page turning unstoppable train journey of a tale to an unknown destination and end.

This story has epic qualities like that of The Dark Tower series by Stephen King that went on for many volumes, The Black Dawn Saga has plenty more to come in its next installment and I anticipate it to be just the right length and hope it to have volumes with the same quality of writing. The reader I hope will learn that the U.K has amongst themselves a very capable writer to paint with words and embed them amidst a realm away from the reality, of our daily trappings, a passage of time to escape to for a while the darkness sets aside into an equilibrium and balance.

“It was a man. At least, I thought it was to begin with. He was tall and thin with a proud chest. He wore black from head to foot: the black hat, of course, and about his shoulders a coat of black plumes, which dropped to below his knees. The coat was open, though, and I could see his tight black trousers over his slender legs. The bottoms of his trousers splayed out over his boots, making them seem huge. At his cuffs, too, sprouted sleek black feathers and the sun, gone cold somehow, caught them and twinkled there like quartz on velvet. The feathers obscured his hands. His black hair was long and silky, like it was wet. And his face…’

“When the Crowman returns to our land you will know that the dark times are at an end. For he will spread his wings across this nation and draw away the black veil that has covered it for so long. It will be a cleansing. It will be death and rebirth. Pray for his swift arrival that we may be delivered. Pray for the coming of the Crowman that we may be, at last transformed.”

Once your done read his other great story Meat my review @ https://more2read.com/review/meat-by-joseph-dlacey/

Reviewed by Lou Pendergrast on 27 March 2013
We use cookies to ensure that we give you the best experience on our website. If you continue to use this site we will assume that you are happy with it.Ok