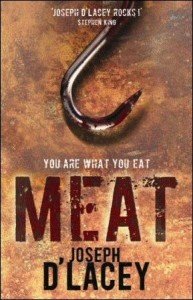 ”Atmospheric and chilling… an irresistibly intense debut novel with the potential to become a controversial horror classic.” – Dru Pagliasotti, The Harrow

”Meat is horror, gruesome, and it has a message…compelling reading, and it will haunt me forever.” – Geoff Nelder, Café Doom

”People are going to discover that ”Meat” is not just a speculative fiction novel with an underlying social statement, but that ”Meat” is actually an important book and it should be required high school reading.” – Timothy Deal, Shroud Magazine

This is a bitter struggle for supremacy between The Meat Baron of The Magnus Meat Processing plant and The Welfare headed by The Grand Bishop for control of Abyrne a town where people know nothing else except “We want Meat to eat”. Well that’s what they have been forced and cohered into, a doctrine of Sacred Meat and nothing else to survive on but is that really all there is to their existence?

One sole provider of special Meat one force of power one leader.

There are a few believers that can think out of the box and believe there is more behind the stage set, more to life and want to free the captive souls from bondage of the Meat Processing Plant.

A man and his family are at risk in this Dark Macabre battle of Evil.

A Revolt is ensuing in its most biblical forms.

The Meat is sourced from Bulls and Dairy Herd and The Chosen who are they?

No doubt you will soon discover in the most original style of story I have read in a while!

There is a gross warning in here you may never look at meat in the same way again!

Joseph D’ Lacy has really crafted a Dark Horrific tale here of dystopian status and has really done well coming from a small publishing house Bloodybooks he has really captured readers across the Atlantic. When Stephen King states on the front cover ‘Joseph D’Lacy Rocks’ it’s a home run for sure!

Be aware there are some extreme scenes of violence and sex.

“And so it went. Their trusting acceptance of their situation and their deep commitment to each other’s emotional safety in all matters. They used their language to touch each other because their hands and arms could not.

We are with you. Here we are.

They said that so often.

Every last one of the meat-eating townsfolk was ignorant, vicious filth. They were the ones who should be slaughtered at two hundred an hour, if only that were possible.”