Book Review: You Are One of Them by Elliott Holt | More2Read

You Are One of Them by Elliott Holt 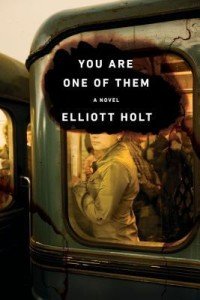 Sarah Zuckerman and Jennifer Jones are best friends in an upscale part of Washington, D.C., in the politically charged 1980s. Sarah is the shy, wary product of an unhappy home: her father abandoned the family to return to his native England; her agoraphobic mother is obsessed with fears of nuclear war. Jenny is an all-American girl who has seemingly perfect parents. With Cold War rhetoric reaching a fever pitch in 1982, the ten-year-old girls write letters to Soviet premier Yuri Andropov asking for peace. But only Jenny’s letter receives a response, and Sarah is left behind when her friend accepts the Kremlin’s invitation to visit the USSR and becomes an international media sensation. The girls’ icy relationship still hasn’t thawed when Jenny and her parents die tragically in a plane crash in 1985.

Ten years later, Sarah is about to graduate from college when she receives a mysterious letter from Moscow suggesting that Jenny’s death might have been a hoax. She sets off to the former Soviet Union in search of the truth, but the more she delves into her personal Cold War history, the harder it is to separate facts from propaganda.

You Are One of Them is a taut, moving debut about the ways in which we define ourselves against others and the secrets we keep from those who are closest to us. In her insightful forensic of a mourned friendship, Holt illuminates the long lasting sting of abandonment and the measures we take to bring back those we have lost.

Good citizen and bad citizen, Nuclear weaponary, War games, KGB, CIA, Russia and America, presidents, secrets and defections.
These all feature somewhere in this storys timeline.
The author tells the tale of two young girls in America, rather wealthy ones, who find a war with Russia quite scary and decide to due the good deed of writing to the Russian president with a letter of concern. The main character who as already lost her sister to illness has forged a relationship with one particular schoolmate who catches the hearts of Russian officials in her letter and soon finds that she is also lost to a tragic accident.
The writing never bored with all the Americans in Russia storytelling it held my interest to the end, the story edges around the spy field and defecting it does not go deep undercover but does a good job showing how some citizens defect in its storytelling. The tv series The American is doing well in the ratings, the Russian and American story seems to still pull in interest and so this tale may provide some decent entertainment in its reading, a story that has some historical significance.

Reviewed by Lou Pendergrast on 31 May 2013
We use cookies to ensure that we give you the best experience on our website. If you continue to use this site we will assume that you are happy with it.Ok