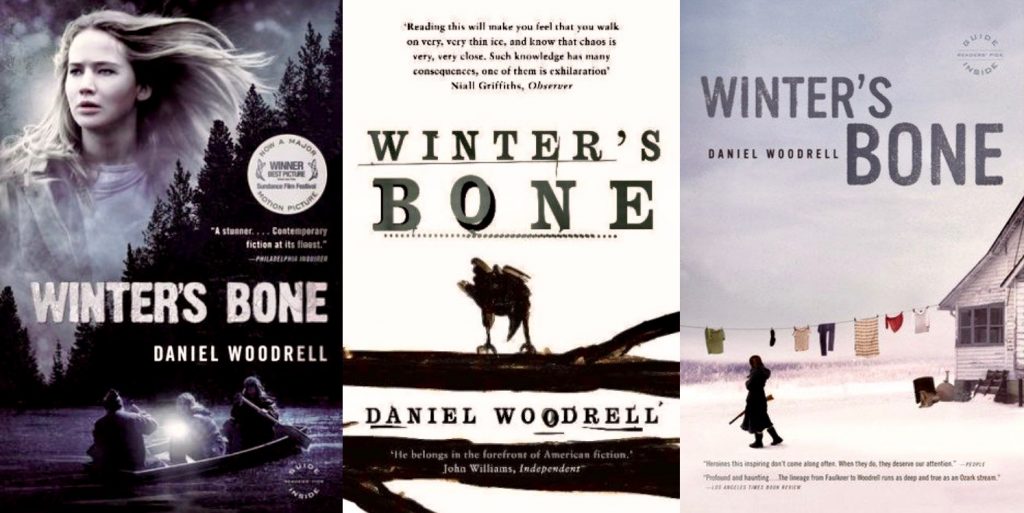 Ree Dolly’s father has skipped bail on charges that he ran a crystal meth lab, and the Dollys will lose their house if he doesn’t show up for his next court date. With two young brothers depending on her, 16-year-old Ree knows she has to bring her father back, dead or alive. Living in the harsh poverty of the Ozarks, Ree learns quickly that asking questions of the rough Dolly clan can be a fatal mistake. But, as an unsettling revelation lurks, Ree discovers unforeseen depths in herself and in a family network that protects its own at any cost.

“The lineage from Faulkner to Woodrell
runs as deep and true as an Ozark stream in
this book. . .his most profound and haunting
yet.”
-Los Angeles Times Book Review

“Woodrell’s Old Testament prose and blunt vision have a chilly timelessness that suggests this novel will speak to readers as long as there are readers.”
-New York Times Book Review

“Daniel Woodrell has produced another stunner, a bleak, beautifully told story about the inescapable bonds of land and blood–fiction at its finest.”
-Kansas City Star

“Heroines this inspiring don’t come along often. When they do, they deserve our attention.”
-People

“The plot of WINTER’S BONE is uncomplicated, yet it packs a kind of biblical, Old West, Cormac McCarthy wallop–hard and deep.”
-Cleveland Plain Dealer

A teenage girl whose surrounded by people getting by surviving on the ways they knew how. Some through honest ways, others through criminal activity. They know each other, different clans that operate in the same circles of business. Her father has slipped up and a bondsman pays a visit with threats of seizing their land if he does not present himself. But he has erred in a more deadly slip, he snitched and now she finds herself having to find her father to save herself and her sick mother and two young brothers from being homeless.
When she undertakes this search for her father she learns of his ill fate and needs proof of his death to a bondsman.

Daniel Woodrell strings great sentences together, evoking the people and the wilderness with the raw and bitter atmosphere.
She is a brave hearted character with plenty of spunk who wishes to be away and free from these responsibilities that have been put upon her. Due to her goodness she can no way leave her brothers and ailing mother in the lurch being without her tendering loving care to hand and her responsibilities of being a role model for her brothers.

This girl is another heroine from the literary world that is memorable and is spoken highly of. In an interview i had with author Alan Heathcock of Volt : Story Collection, commented on the character Ree Dolly…..
“I also really admire Ree Dolly, the hero in Daniel Woodrell’s Winter’s Bone.  Ree does anything and everything she has to do to protect her brother and sister, and endures terrible hardship in the process.  If I list the top 10 toughest people I’ve ever known, that list would be dominated by women.  If Ree Dolly were a real person, she’d be near the top of that list.” also interview here.

“Mom sat in her chair beside the potbelly and the boys sat at the table eating what Ree fed them. Mom’s morning pills turned her into a cat, a breathing thing that sat near heat and occasionally made a sound. Mom’s chair was an old padded rocker that seldom rocked, and at odd instants she’d hum ill-matched snips of music, notes unrelated by melody or pitch. But for most of any day she was quiet and still, wearing a small lingering smile prompted by something vaguely nice going on inside her head. She was a Bromont, born to this house, and she’d once been pretty. Even as she was now, medicated and lost to the present, with hair she forgot to wash or brush and deep wrinkles growing on her face, you could see she’d once been as comely as any girl that ever danced barefoot across this tangled country of Ozark hills and hollers. Long, dark, and lovely she had been, in those days before her mind broke and the parts scattered and she let them go.”

“Ree’s grand hope was that these boys would not be dead to wonder by age twelve, dulled to life, empty of kindness, boiling with mean. So many Dolly kids were that way, ruined before they had chin hair, groomed to live outside square law and abide by the remorseless blood-soaked commandments that governed lives led outside square law. There were two hundred Dollys, plus Lockrums, Boshells, Tankerslys, and Langans, who were basically Dollys by marriage, living within thirty miles of this valley. Some lived square lives, many did not, but even the square-living Dollys were Dollys at heart and might be helpful kin in a pinch. The rough Dollys were plenty peppery and hard-boiled toward one another, but were unleashed hell on enemies, scornful of town law and town ways, clinging to their own.”

“All her aches were joined as a chorus to sing pain throughout her flesh and thoughts.
………When Ree moved she came loose and sagged as the chorus inside hit fresh sharp notes. Her agony was the song and the song held so many voices and Gail lowered her into the bathtub where sunk to her chin in tepid water she marked a slight hushing of all the chorus but the singers in her head.”

“Ree needed often to inject herself with pleasant sounds, stab those sounds past the constant screeching, squalling hubbub regular life raised inside her spirit, poke the soothing sounds past that racket and down deep where her jittering soul paced on a stone slab in a gray room, agitated and endlessly provoked but yearning to hear something that might bring a moment’s rest.”

“Pine trees with low limbs spread over fresh snow made a stronger vault for the spirit than pews and pulpits ever could.”

“Love and hate hold hands always so it made natural sense that they’d get confused by upset married folk in the wee hours once in a while and a nosebleed or bruised breast might result. But it just seemed proof that a great foulness was afoot in the world when a no-strings roll in the hay with a stranger led to chipped teeth or cigarette burns on the wrist.”

“One night is forgot like a fart, two like a pang, but after three nights lain together there is a hurt, and to soothe the hurt there will be night four, and five, and nights unnumbered. The heart’s in it then, spinning dreams, and torment is on the way. The heart makes dreams seem like ideas.”