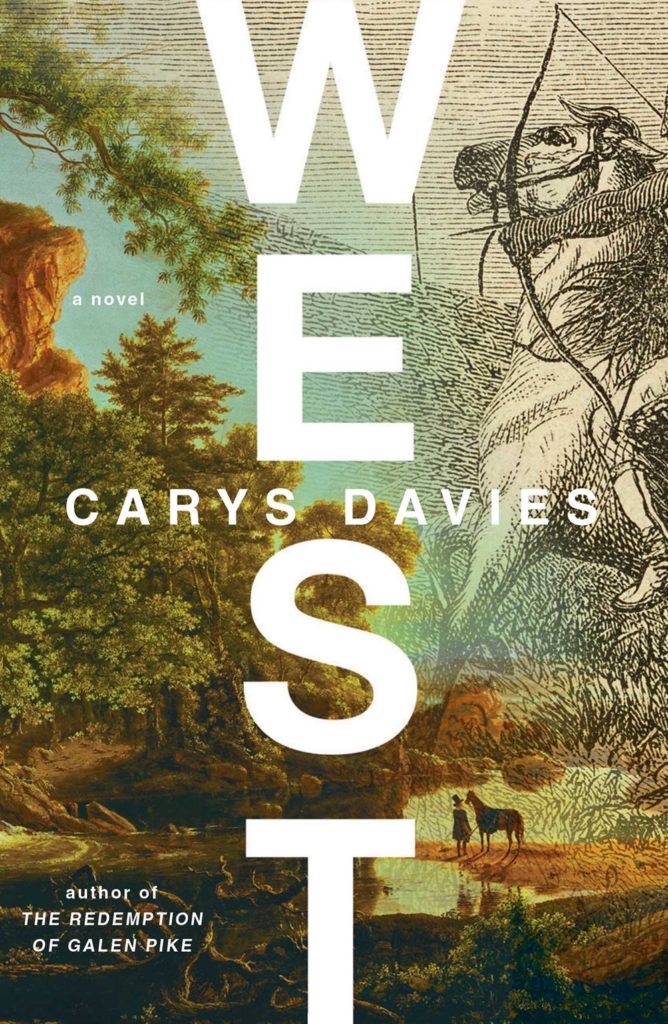 When widowed mule breeder Cy Bellman reads in the newspaper that colossal ancient bones have been discovered in the salty Kentucky mud, he sets out from his small Pennsylvania farm to see for himself if the rumors are true: that the giant monsters are still alive and roam the uncharted wilderness beyond the Mississippi River. Promising to write and to return in two years, he leaves behind his only daughter, Bess, to the tender mercies of his taciturn sister and heads west.

With only a barnyard full of miserable animals and her dead mother’s gold ring to call her own, Bess, unprotected and approaching womanhood, fills lonely days tracing her father’s route on maps at the subscription library and waiting for his letters to arrive. Bellman, meanwhile, wanders farther and farther from home, across harsh and alien landscapes, in reckless pursuit of the unknown.

From Frank O’Connor Award winner Carys Davies, West is a spellbinding and timeless epic-in-miniature, an eerie parable of the American frontier and an electric monument to possibility.

“A multi-faceted gem of a book, West taps the spirit of the great quest novels of Twain, Melville, Cervantes, but with a gentle feminist twist and a fraction of the page count.” —Toronto Star

“Short, incredible, violent, uplifting and empowering – how Davies manages to create such an enduring story in 150 pages is a mystery, but she nails it.” —Stylist

“A tightly-knit, compulsively readable tale…Davies’ slender novel has all the heft of a sprawling western classic.” — Booklist, starred review

“Davies’ slim, complex, and achingly beautiful first novel is a sculpture of daring shifts and provocative symmetries welded together by lyrical, fast-paced prose…The result is a choral performance, reminiscent of those by Penelope Fitzgerald…Deployed on the stage of the midlapsarian American frontier, Davies’ chorus manages to weave threads of myth and hope into the gnarly chords of historical tragedy. A masterful first novel—the sort of book that warms even as it devastates, that forces serious reflection and yet charms.” — Kirkus, starred review

“West proves what in-the-know lovers of her short stories have already been trumpeting: Carys Davies is a deft, audacious visionary, a master of the form. In West, she breaks open our fascination with fated journeys and the irrepressible draw of the unknown, imbuing the American landscape with her own rare magic, twisting the heart as few others can, brilliantly navigating the tension between narrative minimalism and imaginative opulence.” — Téa Obreht, author of The Tiger’s Wife

“To read Carys Davies’ West is to encounter a myth, or a potent dream—a narrative at once new and timeless. Exquisite, continent, utterly vivid, this short novel will live on in your imagination long after you read the last page.” — Claire Messud, author of The Burning Girl and The Woman Upstairs

“West has all the stark power and immediacy of a folk-tale or a legend. It is also structured with great artistry, a beguiling sense of form and pace, and a depth in the way the characters are created, making clear that Carys Davies is a writer of immense talent.” — Colm Tóibín, author of Brooklyn and House of Names

“Menace and mordant wit are the blood that runs through these veins, but there’s a pulse of wonder in Carys Davies’ West. She sees the world and its inhabitants both as we hope they are and as we fear that they might be. An audacious and enigmatic debut of thrilling dimensions, and a reminder of fiction’s possibilities.”— Akhil Sharma, author of Family Life and A Life of Adventure and Delight

“A story of determination, betrayal, folly, and reckless hope written in the grand tradition of the pioneers.  You enter the familiar American frontier and shortly are convinced, with Davies’ hero, that the mammoths of the Pleistocene still shyly roam the Plains.  The seams between imagination and history in this extraordinary story are invisible. I believed every word.” — Salvatore Scibona, author of The End

“West is a journey and a wonder. A man leaves what he loves and goes west in search of the amazing. A story concerned with value and language, love and absence, life and death. A debut of real distinction.” — Bernard MacLaverty, author of Midwinter Break and Cal

“An exquisite debut that’s short in length but steeped in the tall tales of American myth.” — Lit Hub

“An engrossing work of historical fiction grappling with themes of vulnerability, longing and hope that transcend all contexts…West leaves the reader feeling as vulnerable and full of wonder as the book’s main characters.” — BookPage

John Cyrus Bellman set out on an exploration, an excursion out westward in search of a big monster, he would set out along Missouri River equipped with trinkets and gifts to offer for services and the eye and hand of a Native Indian he will hire. Two thousand miles with bags and a new distinctive hat, his tall form, red haired, leaving behind his daughter Bess with her aunt.

Bess, his daughter, is coming of age and whist worrying of her fathers perils away has her own at home.

What will he discover?

An excursion that was meant to partake maybe one to two years to the most.

There are some longings for union again of daughter and father whilst he sets out in search of “an animal incognitum.”

Tragedy home and away.

The lucid prose moved with potent drive for answers and safety, the tale left out some details for the reader to evoke within their minds, the sense of place, people, and conflict. I did want more length in the tale. Characters, place, and situation, memorable, and poignant.

A read that would immerse the reader in one sitting through to read without let downs, a tale of journey, modest in length and depth, a narrative of growth and exploration, with pitfalls, longings, savings, and vulnerabilities.

Reviewed by Lou Pendergrast on 27 April 2018
We use cookies to ensure that we give you the best experience on our website. If you continue to use this site we will assume that you are happy with it.Ok