We Cast a Shadow by Maurice Carlos Ruffin 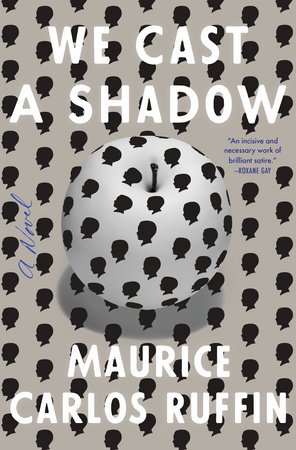 “You can be beautiful, even more beautiful than before.” This is the seductive promise of Dr. Nzinga’s clinic, where anyone can get their lips thinned, their skin bleached, and their nose narrowed. A complete demelanization will liberate you from the confines of being born in a black body—if you can afford it.

In this near-future Southern city plagued by fenced-in ghettos and police violence, more and more residents are turning to this experimental medical procedure. Like any father, our narrator just wants the best for his son, Nigel, a biracial boy whose black birthmark is getting bigger by the day. The darker Nigel becomes, the more frightened his father feels. But how far will he go to protect his son? And will he destroy his family in the process?

This electrifying, hallucinatory novel is at once a keen satire of surviving racism in America and a profoundly moving family story. At its center is a father who just wants his son to thrive in a broken world. Maurice Carlos Ruffin’s work evokes the clear vision of Ralph Ellison, the dizzying menace of Franz Kafka, and the crackling prose of Vladimir Nabokov. We Cast a Shadow fearlessly shines a light on the violence we inherit, and on the desperate things we do for the ones we love.

Praise for We Cast a Shadow:

“Set in the post-post-racial South, We Cast a Shadow tells the story of a man—one of the few black men at his law firm—desperate to pay for his biracial son to undergo demelanization, desperate to ‘fix’ what he sees as his son’s fatal flaw. It is this desperation that haunts this novel and, in this desperation, we see just how pernicious racism is, how irrevocably it can alter how a man sees the world, himself, and those he loves. It is a chilling, unforgettable cautionary tale, and one we should all read and heed.”
—Roxane Gay, author of Bad Feminist

“A full-throated novelistic debut of ferocious power and grace . . . a story that refracts the insanity of the world into a shape so unique you wonder how this book wasn’t there all along.”
—Lit Hub, Most Anticipated Books of 2019

“Propulsive . . . We Cast a Shadow proves that the eeriest works of speculative fiction are those that hit closest to home.”
—Vulture, 37 Books We Can’t Wait to Read in 2019

“A biting satire of anti-blackness in the US.”
—Buzzfeed, 66 Books Coming in 2019 That You’ll Want to Keep on Your Radar

“A powerful novel of just how far one father will go to keep his son safe from the outside world.”
—Parade, Debut Novels Everyone Will Be Reading in 2019

“An ambitious debut novel, We Cast a Shadow is a surrealistic satire about identity, race, and family relations. . . . [Ruffin] is a talented, genre-bending writer to watch.”
—Garden & Gun, January Book List

“We Cast a Shadow is the latest in a stream of daring works that address America’s endemic anti-blackness through dystopian surrealism.”
—HuffPost, 61 Books We’re Looking Forward to Reading in 2019

“Virginia Quarterly Review columnist and essayist Ruffin now publishes his debut novel, a near-futurist social satire about people in a southern city undergoing ‘whitening’ treatments to survive in a society governed by white supremacy.”
—The Millions, Most Anticipated: The Great First-Half 2019 Book Preview

“Like Paul Beatty’s The Sellout and the film Get Out . . . a singular and unforgettable work of political art.”
—Publishers Weekly (starred review)

“Thrilling . . . We Cast a Shadow is haunted by the ghosts of Ralph Ellison and Victor LaValle. But Maurice Carlos Ruffin, as well as the terrifying racial landscape he renders, is a world unto himself.”
—Naomi Jackson, author of The Star Side of Bird Hill

“A literary classic that will outlive us all, We Cast a Shadow is the finely crafted quake the American novel needed.”
—Kiese Laymon, author of Heavy

The tale starts at a work function with the main protagonist in costume, he decides to settle for Centurion instead of Nat Turner, all in the pursuit of happiness as a black man trying make a step up in a white law firm. The main characters pursuit of happiness is one where his son will eventually become white with no trace of black or that of his kids of the future, and getting ahead as white, he tells us of this with this tragic satire in a terrible world no one wants.

Readjust your comfort zones and have fiction make that brain working and cajole one to think on words, utterances of them, and the ramifications it may have had on our main protagonist, with the evil that men and women do along with the hate, on this journey of life.

There is tragedy in the narrative, there is satire, and there is some extremes of one mans endeavour in a pursuit of happiness of an envisioned promised land of his, with the complexities and extremities at saving his son from as he says, “dedicated my life to protecting him from the myriad dangers of black boyhood,” but the world scheme of things does not seem to be conspiring to help him, in a tale that one would hope to be an American myth and not history.

“We lived, at that time, in a part of the City once inhabited by Mosopelea Indians who migrated to the marshlands to avoid the white man, then by immigrants from Continental Europe who, having left behind crowd, famine, and disease, fled the City to escape the black man, then inhabited by blacks who were vigorously reappropriated to the penitentiary at the parish line, and finally by the descendants of those earlier whites who returned when the coast was again clear. Except for me and half of my son, there were no other blacks in our neighborhood.”

“I am a unicorn. I can read and write. I have all my teeth. I’ve read Plato, Woolf, Nikki Giovanni, and Friend. I’ve never been to jail. I’ve voted in every election since I was eighteen. I finished high school. I finished college. I finished law school. I pay taxes. I don’t have diabetes, high blood pressure, or the itis. If you randomly abduct a hundred black men from the streets of the City and deposit us into a gas chamber, I will be the only one who fits this profile. I will be the only one who survives. Is it because I’m better than the other ninety-nine? No. It’s because I’m lucky, and I know it. Somehow the grinding effects of a world built to hurt me have not yet eliminated my every opportunity for a happy life, as is the case for so many of my brethren. The world is a centrifuge that patiently waits to separate my Nigel from his basic human dignity. I don’t have to tell you that this is an unjust planet. A dark-skinned child can expect a life of diminished light. This is truth anywhere in the world and throughout most of history.”

“Put a toy gun in Jamal’s hand in an open-carry state. Wait for Jane or Jonathan to call the police due to a “suspicious-looking black guy.” See the cavalry show up and scalp Jamal. No questions asked. Jane is heartbroken for the tragic misapprehension of the situation, she says over a pumpkin spice latte, as Jonathan bites the tip off a double chocolate biscotti.” 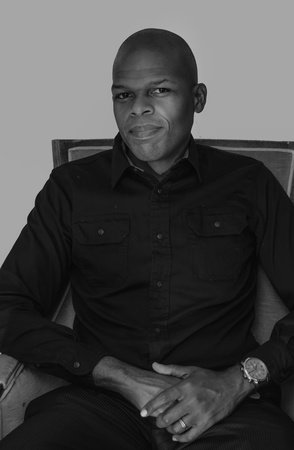 Maurice Carlos Ruffin has been a recipient of an Iowa Review Award in fiction and a winner of the William Faulkner–William Wisdom Creative Writing Competition for Novel-in-Progress. His work has appeared in Virginia Quarterly Review, AGNI, The Kenyon Review, The Massachusetts Review, and Unfathomable City: A New Orleans Atlas. A native of New Orleans, Ruffin is a graduate of the University of New Orleans Creative Writing Workshop and a member of the Peauxdunque Writers Alliance.

Reviewed by Lou Pendergrast on 20 January 2019
We use cookies to ensure that we give you the best experience on our website. If you continue to use this site we will assume that you are happy with it.Ok