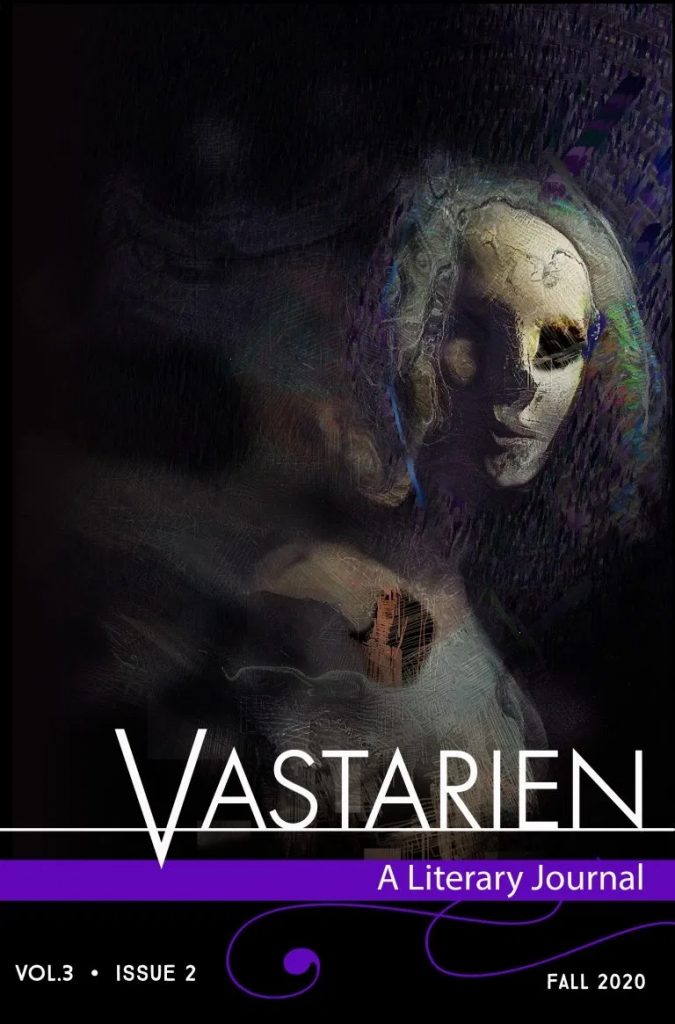 Buy from Amazon U.S.A or U.K

Vastarien: A Literary Journal is a source of critical study and creative response to the corpus of Thomas Ligotti as well as associated authors and ideas. The journal includes nonfiction, literary horror fiction, poetry, artwork and non-classifiable hybrid pieces.

Homeownership and You
Kurt Fawver

I Wake Up and Remember Myself
Michael Griffin

Lessons in Etymology for the New Human
Korbin Jones

You Are the Arm
J.A.W. McCarthy

The Hole in the Wall is Oblivion
John Claude Smith

Reviews of each work will appear as when completed. Possibly once a week two works that worked for me.

Just recently finished his debut novel out Feb 23rd Shelter for the Damned and liked and reviewed it so wanted to give shorter work of his a try.

Dr Cribs i am on to you!
I followed from your building on the outskirts of the district.

Vincent lives in Canada with depression, a high pressure job, plenty monies, and thinking of ways of ending it all, with a bullet or something else.
When all else failed, and Vincent had already tried many routes with various therapies, opportunity knocked with a strange charismatic man that operates from obscurity and anonymity with abilities that may sound appealing and a talent in sniffing out Deprimers.

This was an abstract work that almost carried me under its wings empathically until matters turned down an certain avenue, or should I say agreeing to certain terms, now that is something for concern, one that leaves perplexing rumination with a paradoxical tale, good short stories can do this, question certain beings and choices, along with good word usage.

“No, I’m not one of those hippy-dippy birdbrains who’s out to hemorrhage your savings for a bit of New Age hocus pocus.”

“Most days, it was a kind of deadly nothingness. A boredom so complete that it crushed out the surrounding world. These days even getting up for work had become a seismic effort, so excruciating you might as well have asked him to bungee-jump out his bedroom window at seven in the morning. The numbing effects of depression were almost, almost enough to keep his real concerns at bay—the toxic venom of self-hatred, anxiety, even dread.”

“into the vast, metallic room, which looked like the inside of a spaceship from some low-budget sci-fi movie.”

I Wake up and Remember Myself by Michael Griffin

First person telling evoking the emotions and the domain of his, a psychological taxing perpetual journey in a labyrinth of ones mind and core of being.

This domain an obscure one, trying to understand ones whys and how, decipher ones dilemma, with a memorable empathic discourse on self and self-scrutiny.

This is my second reading of his works and loved his novella Armageddon House and I have two of his collections The Lure of Devouring Light and The Human Alchemy on my pile with beautiful cover art of which I am going to tackle few of his stories in coming weeks.

“In the center of a wide, black emptiness, I wake, wild with the terror of the vacant, newborn mind. I possess nothing, no name or memory of any prior self. All that exists is this perilous new moment, which tilts as if yearning to pitch me forward into some unknown future. The idea of facing anything at all terrifies me. I’m not ready.”

“When eyes open, a self arises, but how much must that self contain to qualify as real? A human being is more than just the raw ingredients of life, unadulterated by a history of personage. What good is the abstract idea of self, without specifics attached? This is much worse than confusion. It’s the lack of the very thing it pretends to be.”

Trouble at the supermarket

the malodorous gelatin of unknown provenance

Whistling of a disquieting tune

Trouble with the television

Trouble with silence and ambient noise

With the myriad of troubles, who’s fault is it?
One thing for sure.
Welcome to the Matthew Bartlett Zone!

It seems to be the birthday of a man of older age. He seems to be lead down paths by a trio, mostly suburban streets and blindfolded. If you see or hear of these sightings report to local authorities.

Okay..well that was a little time in bizarre trappings with terrible unsettling things.

There be peculiarities with mind stirring and word acrobatics maybe.
I like the way he builds the sentence and other places his sharp short shock sentences. My first but not my last read of his works.

“You forget large swaths of your life.”

“The past is a shadow thrown behind me by the sun, the future is the glare that blinds me. There is only the present, and the present teems with trouble.”

“Six week ago, driving down a sun-splashed suburban street to the supermarket, I saw a young couple and a boy approximately six years old leading an old man down the sidewalk, the boy holding the man by the wrist. On the old man’s head sat a colorful, conical pointed birthday hat.”

“The Comestitorium is down the block and around the corner from my apartment, so in my regular neighborhood dealings I end up passing Roscoe’s Delights and Roscoe’s cigar smoke far more frequently than I’d prefer.”

Dear writer I have also abandoned that street and can never pass The Comestitorium and Roscoe’s Delights again.
It is all true what you tell, I couldn’t describe as great as you with vivid evocation and such great descriptiveness Roscoe stands in front of me and his meal, I have to shake these memories from my mind these words here, my last repeating of any dealings or mentions with Roscoe.

“Roscoe himself was a generic sort of man with a plump, squarish, gently mottled face, which looked as though someone had attempted to carve a face into a potato and didn’t finish out of boredom. Frankly, we had no guarantee that he wasn’t a sack or two of potatoes that had gained sentience, donned a human skin and a curly toupee, and opened a local eatery.

But the actual Roscoe before us wears windbreakers and jeans, with hands in his pockets and a smug, faintly distasteful smile, emitting a laugh low in the throat, huhuhuhuhhr, like a choking motor.”

I have food critic heading there I have asked a favor of him, he owes me one, you know Mr Anton Ego that one investigated Gusteau’s restaurant in Paris, he will settle it all. 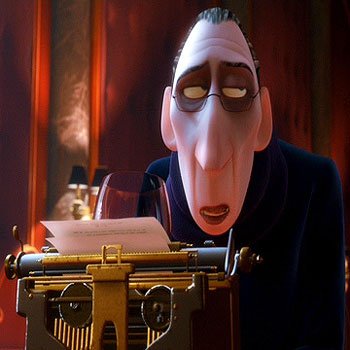 “My apartment, as it happens, is an inadvertent Petri dish of structural decay. The building itself is over a century old, and its interior surfaces form a battered skin, pocked with wrinkles, scars, and weals over time. Eggshell cracks routinely appear in my ceilings and walls, shadows laying down roots that the cold moisture of late-year months and humidity of summer conspire to widen and wedge apart, lapping tongues of layered paint, eventually dropping off in jagged swathes like the facial features of a tertiary syphilitic.”

Yes well I had the same I was in the next block they all seem to be designed in same manner, get out please!

“I grumble past the omnipresent Comestitorium line which now extends down the block and around the corner, obscuring the gate to my apartment stoop.”

And I won’t miss that line because I too had to dodge the terrible souls lining up.

I also did one more thing I saw an ad he posted he was in need of a nanny and I referred one great nanny, Leanne Grayson, she owes me one too, she has been hired and its all working out to plan. Hope to read sometime in the future that you have moved to better accommodations and city. 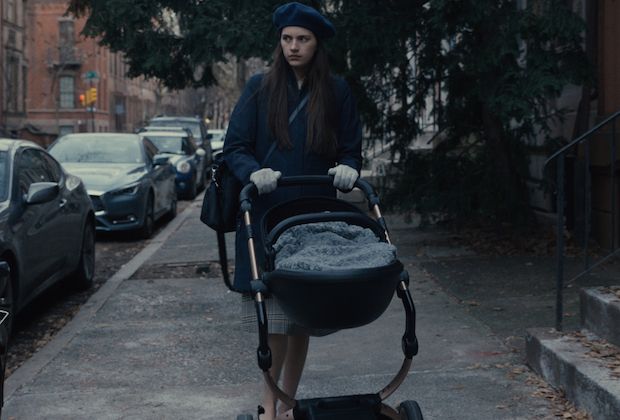 “The Comestitorium served only one item: the embarrassingly named “Roscoe’s Delights,” available slathered in various types of sauce. The titular item was far from “delightful” to look at, reminiscent of blood-drained white worms or skinned, flattened rats’ tails or stringy strips of tripe, spongy and resistant like an oddly complex form of pasta that fought the fork and curled up with the tongue. If one chose, as most did, to eat them with sauce, they were served with a cloudy, jellied orb on top that was prodded open with one’s fork to diffuse over the contents, like a boiled egg—perhaps appropriately, since each orb resembled the amniotic sac of a zygote. With predictable pretension, each of the sauces was also linked somehow to one of the four medieval humours via the restaurant’s menu, which improbably described this whole experience as a gastronomic panoply of gustation for connoisseurs of mastication.”

Reviewed by Lou Pendergrast on 26 February 2021