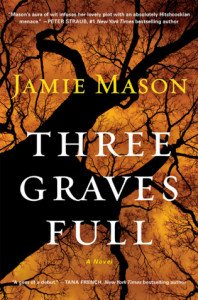 For fans of the Coen brothers’ films or for those who just love their thrillers with a dash of sharp humor—an engaging and offbeat story about a man driven to murder, who then buries the body in his backyard only to discover that there are two other shallow graves on his property.

“There is very little peace for a man with a body buried in his backyard.”

More than a year ago, mild-mannered Jason Getty killed a man he wished he’d never met. Then he planted the problem a little too close to home. But just as he’s learning to live with the undeniable reality of what he’s done, police unearth two bodies on his property—neither of which is the one Jason buried.

Jason races to stay ahead of the consequences of his crime and while chaos reigns on his lawn, his sanity unravels, snagged on the agendas of a colorful cast of strangers. A jilted woman searches for her lost fiancé, a fringe-dweller runs from a past that’s quickly gaining on him, and a couple of earnest local detectives piece it together with the help of a volunteer police dog — all of them in the wake and shadow of a dead man who had it coming. As the action unfolds, each discovers that knowing more than one side of the story doesn’t necessarily rule out a deadly margin of error.

This, as the title states, involves three graves, three dead people.
This is not a mystery told in a conventional way, which is not a bad thing, it’s original.
A story with a cast of characters who are associated with the why and how those bodies got there in the first place is written with a skilful craftsmanship with words and sentences.
The whole dilemma of the bodies presented quite a dark comical and confusing macabre of a vista, this is what has you by the grip and won’t let you go until the whole unravelling of the demons.
The author has churned out a successful debut novel.


Reviewed by Lou Pendergrast on 30 January 2013
We use cookies to ensure that we give you the best experience on our website. If you continue to use this site we will assume that you are happy with it.Ok