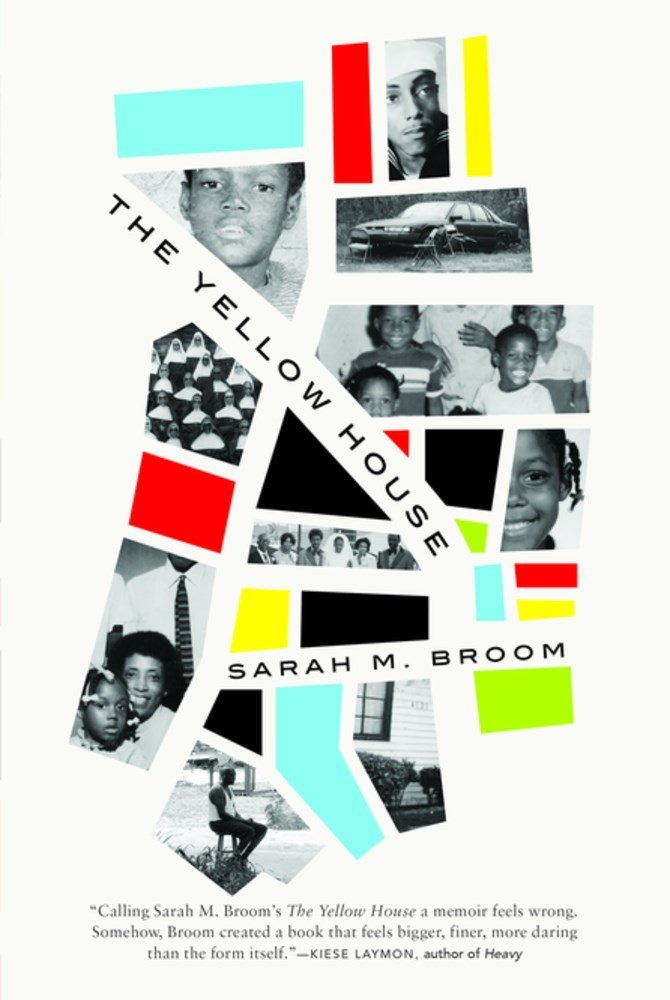 A brilliant, haunting and unforgettable memoir from a stunning new talent about the inexorable pull of home and family, set in a shotgun house in New Orleans East.
In 1961, Sarah M. Broom’s mother Ivory Mae bought a shotgun house in the then-promising neighborhood of New Orleans East and built her world inside of it. It was the height of the Space Race and the neighborhood was home to a major NASA plant—the postwar optimism seemed assured. Widowed, Ivory Mae remarried Sarah’s father Simon Broom; their combined family would eventually number twelve children. But after Simon died, six months after Sarah’s birth, the Yellow House would become Ivory Mae’s thirteenth and most unruly child.

A book of great ambition, Sarah M. Broom’s The Yellow House tells a hundred years of her family and their relationship to home in a neglected area of one of America’s most mythologized cities. This is the story of a mother’s struggle against a house’s entropy, and that of a prodigal daughter who left home only to reckon with the pull that home exerts, even after the Yellow House was wiped off the map after Hurricane Katrina. The Yellow House expands the map of New Orleans to include the stories of its lesser known natives, guided deftly by one of its native daughters, to demonstrate how enduring drives of clan, pride, and familial love resist and defy erasure. Located in the gap between the “Big Easy” of tourist guides and the New Orleans in which Broom was raised, The Yellow House is a brilliant memoir of place, class, race, the seeping rot of inequality, and the internalized shame that often follows. It is a transformative, deeply moving story from an unparalleled new voice of startling clarity, authority, and power.

Praise for The Yellow House:

“Sarah M. Broom’s book is an extraordinary example of how language can make things. Her words, sentences, thoughts as she creates East New Orleans—where she was born—move faster than you will ever keep up—but you damn sure don’t want to let go.”
—John Edgar Wideman, author of Writing to Save A Life: The Louis Till Project

“Every few years, a book comes along that teaches readers of memoir how to read and writers of memoir how to write. Calling Sarah M. Broom’s The Yellow House a memoir feels wrong. Somehow, Broom created a book that feels bigger, finer, more daring than the form itself. The Yellow House literally taught me how to read and write. I will never write or read about family, longing, blackness, femininity, joy and state-sanctioned terror the same way after sitting with this book. Broom narratively glides through choppy air almost in slow-motion, and when I least expect it, she digs into the ground of New Orleans conjuring the most humanely massive intervention I’ve read in 21st century memoir writing.”
—Kiese Laymon, author of Heavy

“A great, multigenerational family story . . . Broom is an engaging guide; she has some of David Simon’s effortless reporting style, and her meditations on eroding places recall Jeannette Walls. The house didn’t survive Katrina, but its destruction strengthened Broom’s appreciation of home. Broom’s memoir serves as a touching tribute to family and a unique exploration of the American experience.”
—Publishers Weekly

“The Yellow House is a masterpiece of history, politics, sociology and memory. Actually, it’s just a masterpiece, period. Sarah M. Broom’s carefully researched portrait of a family and a place possesses the emotional vastness of a multi-generational novel, and shies away from nothing. Her pages are artfully controlled, meditative logic proofs of heartbreak, humor, devastation, celebration and rage. Broom shows what literary nonfiction—and what books—can yet do and be. I already consider her to be one of America’s most important and influential writers.”
—Heidi Julavits, author of The Folded Clock

“Gorgeously written, intimate and wise, Sarah M. Broom’s The Yellow House is an astonishing memoir of family, love, and survival. It’s also a history of New Orleans unlike any we’ve seen before, one that should be required reading.”
—Jami Attenberg, author of All Grown Up

“A heartfelt but unflinching recovery project . . . Broom’s lyrical style celebrates her family bonds, but a righteous fury runs throughout the narrative at New Orleans’ injustices, from the foundation on up. A tribute to the multitude of stories one small home can contain, even one bursting with loss.”
—Kirkus Reviews

“From a singular writer, a crucial memoir of life on the margins—one that, through ruthless observation and deepest intelligence, might help reintegrate what happens in those margins into the central narratives of American life. Alternating gracefully between immediacy and critical distance, she leaves us with deep insight not just into her own family, her own community, but into governance, justice, and inequality in the round. Timeless in its telling, The Yellow House could become a modern classic.”
—Whiting Nonfiction Grant Jury

Sarah M. Broom is a writer whose work has appeared in the New Yorker, The New York Times Magazine, The Oxford American, and O, The Oprah Magazine among others. A native New Orleanian, she received her Masters in Journalism from the University of California, Berkeley in 2004. She was awarded a Whiting Foundation Creative Nonfiction Grant in 2016 and was a finalist for the New York Foundation for the Arts Fellowship in Creative Nonfiction in 2011. She has also been awarded fellowships at Djerassi Resident Artists Program and The MacDowell Colony. She lives in New York state.

Reviewed by Lou Pendergrast on 09 August 2019
We use cookies to ensure that we give you the best experience on our website. If you continue to use this site we will assume that you are happy with it.Ok