The White Forest by Adam McOmber

The White Forest by Adam McOmber 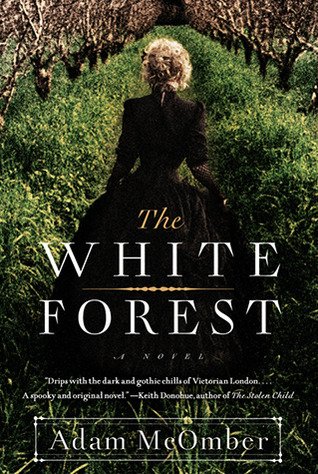 Young Jane Silverlake lives with her father in a crumbling family estate on the edge of Hampstead Heath. Jane has a secret—an unexplainable gift that allows her to see the souls of man-made objects—and this talent isolates her from the outside world. Her greatest joy is wandering the wild heath with her neighbors, Madeline and Nathan.But as the friends come of age, their idyll is shattered by the feelings both girls develop for Nathan, and by Nathan’s interest in a cult led by Ariston Day, a charismatic mystic popular with London’s elite. Day encourages his followers to explore dream manipulation with the goal of discovering a strange hidden world, a place he calls the Empyrean. A year later, Nathan has vanished, and the famed Inspector Vidocq arrives in London to untangle the events that led up to Nathan’s disappearance. As a sinister truth emerges, Jane realizes she must discover the origins of her talent, and use it to find Nathan herself, before it’s too late.

The author has crafted together a winner of a story on many levels.
He has chosen the dark and Gothicness of Victorian London amongst the days of Edgar Allen Poe and Percy Shelly and set the story around a vast evergreen of beautiful and haunting of the Hempstead Heath, plagued with a deep ancient mythical past that has an ever present energy calling a particular woman Jane that traces its origins possibly back before man and religion treaded upon its soil.
There are big questions over the main protagonists supernatural and paranormal abilities and the missing of one man Nathan who one discovers is caught in a love triangle between two women, childhood friends.
Jane needs to understand many things but amongst all the splendour and talk of other worlds something more dear and humble she needs to understand her one first love her mother and what legacy she left behind.
As the story travels down a road to an eventfully grande conclusion of discovery and truths you’ll find yourself compelled and steeped in a sense of place and intrigue.
This adventure made me think of the movie Stardust which was adapted from the Neil Gaiman novel of the same name. This was a great effort for a debut and displays a storytelling quality that has supernatural and history mixed together with some nice writing similar to the authors like Neil Gaiman and Robert McCammon.
As you walk with Jane you will enjoy all that the author brings to the table,
step back into a Dickens like world with Lovecraft and Edgar Allen Poe as your guides.

“The Heath remained a memory of younger days when our friendship was still elegant—not yet fettered by jealousies or thoughts of unnatural forces. The three of us had forged our bond walking those houseless heights beneath the great marble skies watching storm-dark clouds cast shadows on the tall grass. We passed through forests of hawthorn and birch that rose above purple bogs and walked fields lush with wild iris and lavender. Hampstead Heath was like a chapel, serene and godly, and I loved the feeling of the wind burningmy cheeks as it swept down over the hills. When I walked there, I felt the poetry of Keats and Coleridge clinging to its winding paths. But such poetry was nothing compared to the presence of my friends. Our walks provided a sense of stability and comfort that I hadn’t felt since before my mother died. When I was with Maddy and Nathan, I was no longer the lonesome girl lurking in shadows. Instead, I imagined I belonged. I could laugh and even felt that I might one day fall in love.”

“He was the well-born son of Lord William Ashe. been a soldier in Lord Wellingtons brigade in the Crimea and was adept at archery and fond of pistols. He possessed a kind of ethereal Saxon beauty, and when he entered a room, those present—no matter how they felt about him socially—paused to admire his stature. Nathan disliked the law and abhorred his fathers House of Lords. He was a free spirit who read poetry and, on more than one occasion, was found curled on a doorstep after a drunken night at the Silver Home. But none who could make such a list knew the true Nathan Ashe that Maddy and I came to know. He was filled with the sort of fret and despair that needed tending. At the same time, he acted as though we were his equals, taking us on adventures most would have considered too dangerous for young women. We were the ones who truly loved him, and yet we too were left without him.”

“I turned the envelope over and let the button drop into the palm of my hand. As soon as it touched my skin, I experienced the flash of an image that was quite distinct and unlike anything I’d ever perceived from an object before. What I saw appeared to be a stage set populated by painted trees, and above the trees was a black sky decorated with odd bits of glass that were meant to look like stars. The entire false forest was contained within some type of stone chamber, reminiscent of a catacomb. It was so dark there that I could barely see, and the acrid smell of paint that had been used to create the illusion of trees filled my lungs. I had a sense that what I was seeing was an actual place, somewhere in London Then I heard the distant sound of a trumpet, the sort of horn that signaled the opening of a hunt.”

” From a distance, the Crystal Palace in Hyde Park appeared quite impossible—as if the whole of its turreted glass structure was nothing more than a grand illusion. It seemed an endless and transparent mirage, drifting over the park’s grassy field, blazing in the sun. It had opened its doors in May as a showplace for the stunning achievements of Victorias empire, and though I hadn’t dared to pay a visit as most of London had, I’d read numerous reports.
The palace was a marvel of human invention, composed entirely of glass—some three hundred thousand panes, suspended across a scant metal skeleton that encompassed a great expanse of the park. Many viewers attested that being inside the structure was initially disturbing. The structure produced a dizzying sensation, as sunlight was amplified by the glass panes, and some said they feared being “crushed” by all that dazzling light.
The queen herself visited the Crystal Palace, showing particular interest in the great aviary that was filled with fifteen hundred canaries. It was well known that Victoria was a lover of birds, and this particular display was said to provide a marvelous and disorienting rush of color and noise.”

” The view of the Southwark slums from Blackfriars was one of crooked houses inked on a vellum sky. Dwarf stone walls circled cinder gardens. An exhaustive tangle of streets for which no map had ever been drawn, sprawled in all directions. The Roman soldiers had used the area to bury their dead, and in our time, it housed many of the city’s stink industries (glue factories, vinegar makers, tanneries, and the like). A brown haze drifted across over the cupolas and towers, nearly obscuring the skeletal dome of the pleasure garden called the Temple of the Lamb, beneath which we would find Ariston Days Theater of Provocation.”

Reviewed by Lou Pendergrast on 14 September 2012