The Red Lotus by Chris Bohjalian 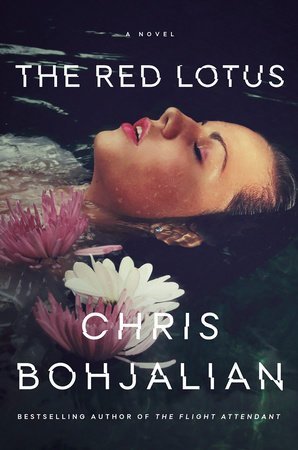 From the #1 New York Times bestselling author of Midwives and The Flight Attendant comes a twisting story of love and deceit: an American man vanishes on a rural road in Vietnam, and his girlfriend, an emergency room doctor trained to ask questions, follows a path that leads her home to the very hospital where they met.

The first time Alexis saw Austin, it was a Saturday night. Not in a bar, but in the emergency room where Alexis sutured a bullet wound in Austin’s arm. Six months later, on the brink of falling in love, they travel to Vietnam on a bike tour so that Austin can show her his passion for cycling and he can pay his respects to the place where his father and uncle fought in the war. But as Alexis sips white wine and waits at the hotel for him to return from his solo ride, two men emerge from the tall grass and Austin vanishes into thin air. The only clue he leaves behind is a bright yellow energy gel dropped on the road. As Alexis grapples with this bewildering loss, and deals with the FBI, Austin’s prickly family, and her colleagues at the hospital, Alexis uncovers a series of strange lies that force her to wonder: Where did Austin go? Why did he really bring her to Vietnam? And how much danger has he left her in? Set amidst the adrenaline-fueled world of the emergency room, The Red Lotus is a global thriller about those who dedicate their lives to saving people, and those who peddle death to the highest bidder.

Chris Bohjalian is the #1 New York Times bestselling author of 20 books. His work has been translated into 35 languages and three times become movies.

It will be a limited TV series from Warner Brothers on HBO Max, starring Kaley Cuoco (who is also an Executive Producer). Filming is expected to start in the autumn of 2019.

He is also a playwright and screenwriter. His first play, “Grounded,” premiered at the 59 East 59th Theatres in New York City in the summer of 2018 and is now available as an audiobook and eBook, “Wingspan.” He is currently adapting his novel, “Midwives,” for a play, which will premiere January 21, 2020 at the George Street Playhouse, and be directed by David Saint.

His books have been chosen as Best Books of the Year by the Washington Post, the St. Louis Post-Dispatch, the Hartford Courant, the Milwaukee Journal-Sentinel, Publishers Weekly, Library Journal, Kirkus Reviews, Bookpage, and Salon.

His awards include the Walter Cerf Medal for Outstanding Achievement in the Arts; the ANCA Freedom Award for his work educating Americans about the Armenian Genocide; the ANCA Arts and Letters Award for The Sandcastle Girls, as well as the Saint Mesrob Mashdots Medal; the New England Society Book Award for The Night Strangers; the New England Book Award; Russia’s Soglasie (Concord) Award for The Sandcastle Girls; a Boston Public Library Literary Light; a finalist for the Lambda Literary Award for Trans-Sister Radio; a Best Lifestyle Column for “Idyll Banter” from the Vermont Press Association; and the Anahid Literary Award. His novel, Midwives,was a number one New York Times bestseller, a selection of Oprah’s Book Club, and a New England Booksellers Association Discovery pick. He is a Fellow of the Vermont Academy of Arts and Sciences.

He has written for a wide variety of magazines and newspapers, including The New York Times, The Washington Post, Cosmopolitan, Reader’s Digest, and The Boston Globe Sunday Magazine. He was a weekly columnist in Vermont for The Burlington Free Press from 1992 through 2015.

He lives in Vermont with his wife, the photographer Victoria Blewer.

Their daughter, Grace Experience, is a young actor in New York City. Among the audiobooks she has narrated are Close Your Eyes, Hold Hands and The Guest Room.

Reviewed by Lou Pendergrast on 05 September 2019
We use cookies to ensure that we give you the best experience on our website. If you continue to use this site we will assume that you are happy with it.Ok