The Orchardist by Amanda Coplin

The Orchardist by Amanda Coplin 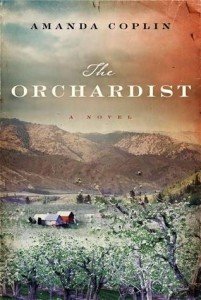 At the turn of the twentieth century, in a rural stretch of the Pacific Northwest, a reclusive orchardist, William Talmadge, tends to apples and apricots as if they were loved ones. A gentle man, he’s found solace in the sweetness of the fruit he grows and the quiet, beating heart of the land he cultivates. One day, two teenage girls appear and steal his fruit from the market; they later return to the outskirts of his orchard to see the man who gave them no chase. Feral, scared, and very pregnant, the girls take up on Talmadge’s land and indulge in his deep reservoir of compassion. Just as the girls begin to trust him, men arrive in the orchard with guns, and the shattering tragedy that follows will set Talmadge on an irrevocable course not only to save and protect but also to reconcile the ghosts of his own troubled past.

Transcribing America as it once was before railways and roads connected its corners, Amanda Coplin weaves a tapestry of solitary souls who come together in the wake of unspeakable cruelty and misfortune. She writes with breathtaking precision and empathy, and in The Orchardist she crafts an astonishing debut novel about a man who disrupts the lonely harmony of an ordered life when he opens his heart and lets the world in.

The Orchardist is a story featuring a main protagonist, an orchardist, a worker of a wonderful apricot orchard. This is a tale of the country of a modest man who lives by modest standards he happens to come upon two desperate souls, young women and he takes them very slowly under his wing for raising. A new birth an offspring soon learns of the wonders of the orchard and grows to love it, to want to live there. One of the women wants more as time passes she wants to be amongst the men that work in the wild she wants to run with the men on horses hunting and sitting by campfire drinking. This can be a troublesome environment for woman in a male dominated pasture. Troubles arise for this soul and the main protagonist finds himself in a great task in trying to understand and help her plight.
He himself has had his sorrow and is still dealing with loss. His loss is of a very dear sister to him and many times talks of her wandering in the fields or of her presence in a ghostly way. This story is strung together with some fine writing, descriptions and feelings for loss and love of nature and life.
This heartfelt journey contained does make this story one to remember and talk of.
With a Memorable setting, characters and some great paragraphs this is one great effort for a debut.

“There were long periods where he did not think of Elizabeth at all. Time had intervened, after all, so that grief had not killed him. At times he could imagine her fate matter-of-factly, he could distance himself from it: he had a sister who had disappeared into the woods, and no one knew what had become of her. It had all happened so long ago; he had continued with his life, accepted her absence. This is what he told himself; and it was partly true. But other times even his flesh was sensitive to air, and what could have befallen her- and what she had suffered-tortured him. The litany of possibilities always hung about him, and during periods of weakness he turned to it, scrolled through it; amended some possibilities, added others.”

“To her (Della) the orchard was an empty scene that did not fill until the horses entered it. And now she wanted to be a horsewoman. It was the only thing she wanted.”

“But most of the men liked her; they liked, were amused by, her fierceness and her earnestness about horses. They too at different times and in different situations would witness her strange vulnerability and wanted to protect her.”

“Each morning she was fortified by hope: the future loomed.”

“Clee’s hands were stained red from the butchering. Blood smudged on his cuffs. He pulled on the pipe a few times and then there was the odour of tobacco smoke missing with the odour of fires and venison. The sky overhead was darkening, and when Talmadge pulled his face away from the fire-the smoke was in his eyes-the outer air was cold. Evening had set in. the fires sent their flames high. The man talked and laughed, and behind and beyond them was the sound of the horses, which never died. The sound was loud and soft at the same time, like the sound upon which other sound was built. You didn’t hear the horses until you listened to them; and then they were very lou. Already Talmadge was becoming used to them. How that presence equated with silence until it was gone, and then you understood what silence really was.”

“His own image pleased him (Talmadge), though he knew he was considered ugly, even without the smallpox scars.”

Reviewed by Lou Pendergrast on 14 August 2012