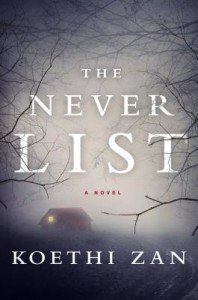 An apt title for this tale of desolate happenings, two friends had made a list of things, the never list, they had looked at every possibility of things going wrong, paranoia and insecurity that extra mile, they overlooked one important rule of all.
Never get in the car.
They had thought fate did not come into the scheme of things and looked at every possibility of an evil and dark end, except one.
Many years later the main protagonist is still living though her days of being gone and harmed, she had hardly left her home but as new information and possible dangers unearth she finds herself forced to retrace the past and find answers to the unanswered and learns a new set of facts.

The author has you thoroughly immersed in her narrative, she has created the need to keep reading on in her female protagonists road of survival, courage, and living.
A story told dealing with a stark set of affairs but very real in its emotions and trials.
A not to be missed read, a must read released the Summer of 2013.

Reviewed by Lou Pendergrast on 16 July 2013
We use cookies to ensure that we give you the best experience on our website. If you continue to use this site we will assume that you are happy with it.Ok