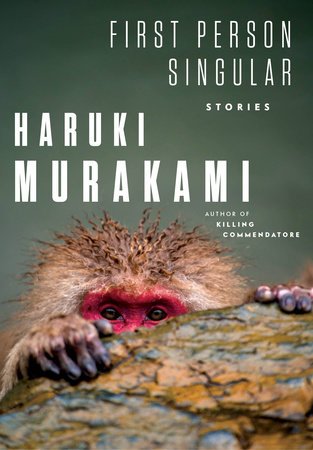 A mind-bending new collection of short stories from the internationally acclaimed, Haruki Murakami.

The eight stories in this new book are all told in the first person by a classic Murakami narrator. From memories of youth, meditations on music, and an ardent love of baseball, to dreamlike scenarios and invented jazz albums, together these stories challenge the boundaries between our minds and the exterior world. Occasionally, a narrator may or may not be Murakami himself. Is it memoir or fiction? The reader decides.

Philosophical and mysterious, the stories in First Person Singular all touch beautifully on love and solitude, childhood and memory. . . all with a signature Murakami twist.

“Murakami’s engrossing collection offers a crash course in his singular style and vision, blending passion for music and baseball and nostalgia for youth with portrayals of young love and moments of magical realism . . . Murakami’s gift for evocative, opaque magical realism shines in “Charlie Parker Plays Bossa Nova,” in which a review of a fictional album breathes new life into the ghost of the jazz great, and “Confessions of a Shinagawa Monkey,” wherein a talking monkey ruminates with a traveler on love and belonging. Murakami finds ample material in young love and sex, showcased in “On a Stone Pillow,” in which a young man’s brief tryst with a coworker, unremarkable in itself, takes on a degree of immortality after she mails him her poetry . . . These shimmering stories are testament to Murakami’s talent and enduring creativity.”
—Publishers Weekly (Starred Review)

“Whether in his epic-scale novels or in his shorter works, much of Murakami’s appeal has always come from the beguiling way in which his characters react to wildly fantastical events in the most matter-of-fact manner, ever ready to accept how the twists and turns of everyday life can blend into more audacious alternate realities. In these eight stories, we see that phenomenon most disarmingly in “Confessions of a Shinagawa Monkey,” in which a monkey strides into a sauna at a remote hotel and asks the narrator if he would like to have his back scrubbed . . . The glue that holds together Murakami’s blending realities—in these stories and, indeed, in all of his fiction—is always the narrator’s love for something (a woman, a song, a baseball team, a moment in the past) that is both life-giving and deeply melancholic. Masterful short fiction.”
—Bill Ott, Booklist (Starred Review)

“A new collection of stories from the master of the strange, enigmatic twist of plot . . . Music is never far from a Murakami yarn, though always with an unexpected turn: Charlie Parker comes in a dream to tell one young man that death is pretty boring and meaningless . . . Murakami’s characters are typically flat of affect, protesting their ugliness and ordinariness, and puzzled or frightened by things as they are. But most are also philosophical even about those ordinary things, as is the narrator of that fine Beatles-tinged tale, who ponders why it is that pop songs are important and informative in youth, when our lives are happiest . . . An essential addition to any Murakami fan’s library.”
– Kirkus

Reviewed by Lou Pendergrast on 17 January 2021