The Carrion Birds by Urban Waite 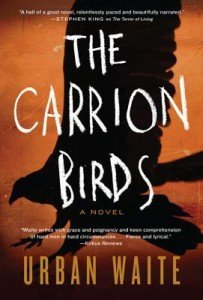 Set in a small town in the Southwest, a soulful work of literary noir rife with vengeance and contrition from a fresh voice in fiction—the author of the highly acclaimed The Terror of Living

Life hasn’t worked out the way Ray Lamar planned. A widower who’s made some tragic mistakes, he’s got one good thing going for him: he’s calm and efficient under pressure, usually with a gun in his hand. A useful skill to have when you’re paid to hurt people who stand in your boss’s way.

But Ray isn’t sure he wants to be that man anymore. He wants to go home and see the son he hopes will recognize him. He wants to make a new life far from the violence of the last ten years, and he believes that one last job will take him there. A job that should be simple, easy, clean.

Ray knows there’s no such thing as easy, and sure enough, the first day ends in a catastrophic mess. Now the runners who have always moved quietly through this desert town on the Mexican border want answers. And revenge. Short on time, with no one to trust but himself, Ray must come up with a plan, or else Coronado, New Mexico’s lady sheriff will have a vicious bloodbath on her hands.

Set in a town once rich with oil, now forgotten and struggling, The Carrion Birds is filled with refreshingly realistic and vulnerable characters. With its masterfully orchestrated suspense and unexpected bursts of lyricism, this is a remarkably unsettling and indelible work in the tradition of Cormac McCarthy, Elmore Leonard, and Dennis Lehane.

In this second book of his he has successfully penned a tale in the tradition of No Country for Old Men a western noir, a desert plain blood drenched by a hired killer.

I enjoyed this story more than his debut The Terror of Living, his prose and characters have you hooked right until the curtain drops.

Think No Country for Old Men with a bit more humanity and likeability in the main protagonist.

The setting for this blood soaked western tale is a town Coronado, this was home once for Ray our main character and as he returns, the past life of his, the before, the time when he tried to be a family man all came flooding back in painful memories and realization on the things he left behind, before he took up being a lethal hired killer working mostly for a drug cartel cleaning up shop in towns, around plains, and Coronado is the next stop under the big mans instructions.

His killing business and his past is a lethal mix and with family in the balance I am sure this is one job that Ray would have set back time and left his family turf alone. Alas this very capable author puts us in the mix as the tale unwinds you will be witness to a grand finale a showdown that has many lives at stake.

He has a cousin Tom, was a sheriff but now retired, they shared many adventures together in their youth, once as sheriff he put his neck on the line to save Rays ass.

One was upholding the law the other breaking it.  Tom finds himself deputized to help out with all the dead bodies turning up and soon finds himself in a dilemma with great decisions to make.

Ray before he took up the gun and left Coronado for the first time, he had fled away from his kin, his responsibility, after the tragic death of his wife he no longer could cope with his autistic son so left him behind, his son, his father, and his cousin.

In some way Ray hopes in his deepest self that some wounds could be mended on his return but his conduct of business is the killer of any repairs or bridges in repairing the past.

I am happy to certify that Stephen King was right that this one was even better than his first in his saying, “A hell of a good novel, relentlessly paced and beautifully narrated. This is good. I bet the next one will be even better,” and the praises he mentioned for the debut novel are just as much right for this great western noir tale with slice of humanity penned by Urban Waite.

“He knew, too, that in this new life, there was an emptiness to his actions, a hopelessness that had come with his time away, carried along beside him like a parasite in the skin. Never to be satisfied in this world or the next, and that would keep him going until he might fill that hole, bored through from one side to the other. For which he felt, sitting there on the porch looking back at Coronado, he would never find fulfillment. It had made the killing of that old man in the hills outside town all the easier.”

“When his breath came back to him. it came all at once—like someone surfacing from the depths into air. His lungs hungry tor the world above and his pupils dilated black and wide, as if coming into light from a great darkness. He fell back with a hand held out for support on the fireplace behind. The flash of memory shifting across his vision like a slide reel, image after image from a life completely lost to him. His wife standing on the courthouse steps, the birth of their child, their first night in the new house outside of Coronado, the call of sirens before the knock came on his door, the wreckage of his wife’s car and the black scrape of tires across asphalt that would never make sense to Him. Where was Billy? A desperate need to know now rose all the way through him. Where was his son?”

“He didn’t know what he hoped for. Ray had shot a deputy, he’d murdered more than ten men, and he was out there still. All of it went against anything Tom could ever accept as a peace officer. But Ray was his cousin, a month older than him, and they’d been like twins once, growing up together and thinking for the longest time that they would always consider Coronado home. Now, Tom didn’t know how he felt, and he rode north.”

Reviewed by Lou Pendergrast on 17 April 2013
We use cookies to ensure that we give you the best experience on our website. If you continue to use this site we will assume that you are happy with it.Ok