Sometimes the Wolf by Urban Waite 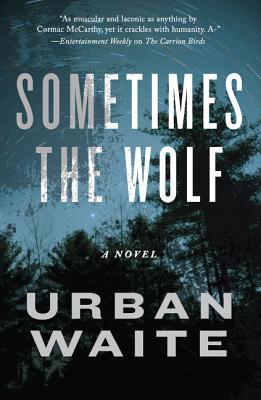 Father and sons, sins of fathers, appear in fiction again and once again under the careful mastery of yet another capable author unflinching in pace and unflinching with the want to read more of in this thriller.

I have loved every novel of this authors since is debut with Terror of Living and this one continues on from that tale.
Follow ons, sometimes are a hard act for any author to continue successfully, for Urban Waite its a walk in the park, but also with wolves, money and truths.
He has you in his grasp with everything unfolding at hand and wastes no pages, clear and hits straight home with changing narratives and changing paces you are really not allowed to step back, i am sorry to say but have to run it right through to the end of the tale.
The author has done something key and important, something that really oozes success and that is sentences with the right words and economy keeping you at the edge of the cliff at times, a thriller in a sense and also a very human event unfolding with very serious matters in the balance.

He is a haunted soul the main character, son of Patrick Drake, Bobby, when he was seven his mother died.
Plenty of things needed settling, between father and son, the lack of for one of presence, that empty place in his heart, the hurt his father left behind.
The father was wanting to make good of the wrong all his life, when the time came, just being released from prison, time the very precious element of life, is vanishing faster than the wolves can return within their perimeter.

“The man locked away for a third of Drake’s life, Sheriff Patrick Drake, a legend in his time with no other family left in Silver Lake except his son and daughter-in-law.”

“It was almost twelve years to the day since his father had been sentenced. In the years past Drake had searched for some sign of his father in his own face, looking at himself in the mirror of his cruiser, or under the bright changing-room lights of the department. The genes there that all who met him said were evident in his face. A fine line dividing the two of them, a reason Drake had tried so desperately in the last twelve years to distance himself from the father everyone could see within him.”

Reviewed by Lou Pendergrast on 07 November 2014
We use cookies to ensure that we give you the best experience on our website. If you continue to use this site we will assume that you are happy with it.Ok