Book Review: Save Yourself by Kelly Braffet | More2Read

Save Yourself by Kelly Braffet 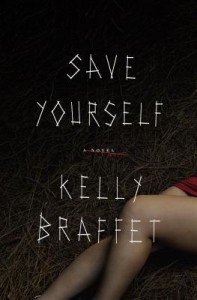 SAVE YOURSELF has the narrative flair of Gillian Flynn and Adam Ross, the scruffy appeal of Donald Ray Pollock, and the addictiveness of Breaking Bad.

“This summer’s must-read. . . . Braffet expertly captures the suffocating confines of small-town life and the desperation of its outliers, with prose that simmers and thrums. . . . The tension Braffet generates becomes nearly unbearable, and the conclusion, when it comes, feels satisfying and thoroughly earned.” —Laura Miller, Salon

“Kelly Braffet is the real deal.  Save Yourself is an electrifying, tomahawk missile of a thriller with honest-to-God people at its core. It rocks the house.” —Dennis Lehane, author of Live by Night

“Kelly Braffet’s Save Yourself is that rare and beautiful thing—a novel that takes us to dark places not just through vivid storytelling but also through keen emotional force. It’s a tale of damaged families and the perilous weight of the past, and as the action rushes towards its chilling conclusion, you’ll find yourselves breathless, shaken, moved.” —Megan Abbott, author of Dare Me

“Astonishing.  Save Yourself goes deep into the hidden and shameful parts of grief, love, and anger, and the reader emerges shaken and grateful on the far end. It’s a lacerating read, and proves that Braffet is a writer in full command of her many, many talents.” —Emma Straub, author of Laura Lamont’s Life in Pictures

“Excruciatingly rendered characters and locomotive plotting. . . . The plot is on a collision course that is going to end ugly—but also, in Braffet’s hands, beautifully. . . . Perceptive, nervy, and with broad cross-genre appeal.” —Booklist

Prepare yourself for a poetic inferno of a ride.

This author has successfully created an inferno here on earth amidst people, characters you know and see everyday, characters whom whilst not quite understanding the real deal trapped in a vicious circle of love, pain, submission and rebellion.

Betrayal, murder, revenge, ties that bond with serious consequences, parents failing their kids, parents that want control and order, others that had lost it, young girls, sisters in rebellion whom want to understand each other and find someone who attains control over them, this someone insidiously spins a web and has them seeing things very foggily.

In this seat of power lays Justinian, he seeks to have those around him find pleasure through pain and power through submission and wisdom through doing stupid things.

The author has you total immersed in these believable characters she has cast, tied in viscerally with great writing, sentencing, and the dying need to know how they all end up in their little bubble of finding themselves through the lies, betrayal and darkness.

A story that will have you thoroughly satisfied in what being caught up in a great tale was once like.

“Here, with Justinian and his people, was the only place she would ever feel safe again.”

Reviewed by Lou Pendergrast on 03 August 2013
We use cookies to ensure that we give you the best experience on our website. If you continue to use this site we will assume that you are happy with it.Ok