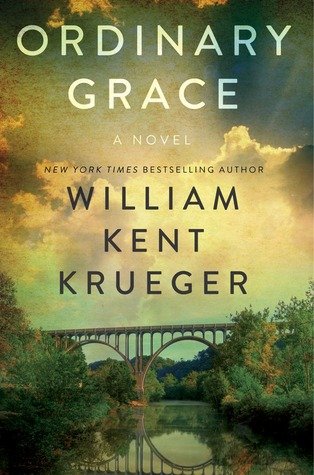 “A pitch-perfect, wonderfully evocative examination of violent loss. In Frank Drum’s journey away from the shores of childhood—a journey from which he can never return—we recognize the heartbreaking price of adulthood and it’s ‘wisdoms.’ I loved this book.” – (Dennis Lehane, New York Times bestselling author of Live by Night and The Given Day )

“A respected mystery writer turns his attention to the biggest mystery of all: God. An award-winning author for his long-running Cork O’ Connor series, Krueger aims higher and hits harder with a standalone novel that shares much with his other work…. ‘the awful grace of God,’ as it manifests itself within the novel, would try the faith of the most devout believer. Yet, ultimately, the world of this novel is one of redemptive grace and mercy, as well as unidentified corpses and unexplainable tragedy. A novel that transforms narrator and reader alike.” – (Kirkus Reviews )

“Once in a blue moon a book drops down on your desk that demands to be read. You pick it up and read the first page, and then the second, and you are hooked. Such a book is Ordinary Grace…This is a book that makes the reader feel better just by having been exposed to the delights of the story. It will stay with you for quite some time and you will always remember it with a smile.” – (Huffington Post )

“There was a playwright, Son, a Greek by the name of Aeschylus. He wrote that he who learns must suffer. And even in our sleep pain, which cannot forget, falls drop by drop upon the heart, until, in our own despair, against our will, comes wisdom through the awful grace of God.”

The father was a pillar of respectfulness, a preacher, the mother sung in the choir and had a beauty and grace.
The two young brothers of the family were inseparable and loved, they were brave and adventurous, respectful to their kin and full of wanting answers to the problems that hit this great family and their small town. There will be some grace but the reader will hope that there will be a peace and a closure for the family.
Forgiveness will be not just be part of Sunday rhetoric, but will be a real test, for this family will have to try to consider possessing it through their hardest of times.
The narrative is from one boy Frank his passage of time, coming-of-age, his thoughts, emotions, and visions on the world around him empathic and resoundingly felt by the reader.
This has a wonderful cast of memorable characters and has some great feel good moments and some shocking moments. The story was written win a great grace and pace and really done well in captivating and hooking the reader to a expectant resolve to the dilemma that hits this family from a small town.
This story will learn in the corners of your mind for some time.
Those that liked the story A Land More Kind Than Home By Wiley Cash would love this treat of a story
A poignant family tale, in this passage of time, humanity, characters take the stage with love, respect, loss, belief, forgiveness and redemption running its course, gracefully delivered.

“All the dying that summer began with the death of a child, a boy with golden hair and thick glasses, killed on the railroad tracks outside New Bremen, Minnesota, sliced into pieces by a thousand tons of steel speeding across the prairie toward South Dakota. His name was Bobby Cole. He was a sweet-looking kid and by that I mean he had eyes that seemed full of dreaming and he wore a half smile as if he was just about to understand something you’d spent an hour trying to explain. I should have known him better, been a better friend. He lived not far from my house and we were the same age. But he was two years behind me in school and might have been held back even more except for the kindness of certain teachers. He was a small kid, a simple child, no match at all for the diesel-fed drive of a Union Pacific locomotive.”“An hour later she came downstairs wearing a black dress. She had on a black hat with a black veil and black pumps. She smelled of bath powder. Jake and I were dressed for the service. We had the television on and were watching a rerun of The Restless Gun. My mother was beautiful. Even we her thoughtless sons knew that. Folks were always saying she could have been a movie star. Pretty as Rita Hayworth they said.”

“When my mother finally sang it was not just a hymn she offered, it was consummate comfort. She sang slowly and richly and delivered the heart of that great spiritual as if she was delivering heaven itself and her face was beautiful and full of peace. I shut my eyes and her voice reached out to wipe away my tears and enfold my heart and assure me absolutely that Bobby Cole was being carried home. It made me almost happy for him, a sweet boy who didn’t have to worry anymore about understanding a world that would always be more incomprehensible to him than not. “

“And I thought about telling them how I’d figured Bobby was hopeless but I was wrong and Gus was right. Bobby had a gift and the gift was his simplicity. The world for Bobby Cole was a place he accepted without needing to understand it. Me, I was growing up scrambling for meaning and I was full of confusion and fear.”

“Ariel was my parents’ golden child. She had a quick mind and the gift of easy charm and her fingers possessed magic on the keyboard and we knew, all of us who loved her, that she was destined for greatness. She was my mother’s favorite and may have been my father’s too though I was less certain of his sentiments. He was careful in how he spoke of his children, but my mother with passionate and dramatic abandon declared Ariel the joy of her heart. What she did not say but all of us knew was that Ariel was the hope for the consummation of my mother’s own unfulfilled longings. It would have been easy to hate Ariel. But Jake and I adored her. She was our confidante. Our co-conspirator. Our defender. She tracked our small successes better than our distracted parents and was lavish in her praise. In the simple way of the wild daisies that grew in the grass of the pasture behind our home she offered the beauty of herself without pretension.”

“The man who told us to eat grass, he was killed, and our warriors stuffed grass into his mouth. It was a hopeless thing we tried to do, because the whites, they had soldiers and guns and money and newspapers that repeated all the lies. In the end, our people lost everything and were sent away from here. Thirty-eight of our warriors were hung in one day, and the whites who watched it cheered.”

Reviewed by Lou Pendergrast on 27 March 2013
We use cookies to ensure that we give you the best experience on our website. If you continue to use this site we will assume that you are happy with it.Ok