A few words i found by Stephen King about this novel

“Probably Ghost Story by Peter Straub is the best of the supernatural novels to be published in the wake of the three books that kicked off a new horror “wave” in the seventies—those three, of course, being Rosemary’s Baby, The Exorcist, and The Other. The fact that these three books, all published within five years of each other, enjoyed such wide popularity, helped to convince (or reconvince) publishers that horror fiction had a commercial potential much wider than the readership of such defunct magazines as Weird Tales and Unknown or the paperback reissues of Arkham House books. ”

This was a real haunting good read, the story drives you crazy in places with characters perceptions of reality being played with by the supernatural.This is my first Straub novel and he writes a plot well and makes you feel you are there amidst the snow filled town slowly falling apart day by day.The story paces well and does not let down, the tale was reminiscent of Something Wicked This Way Comes by Ray Bradbury.
reddit.com Interviews Author Peter Straub 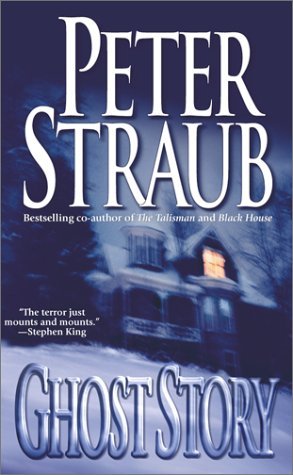 Reviewed by Lou Pendergrast on 24 January 2012