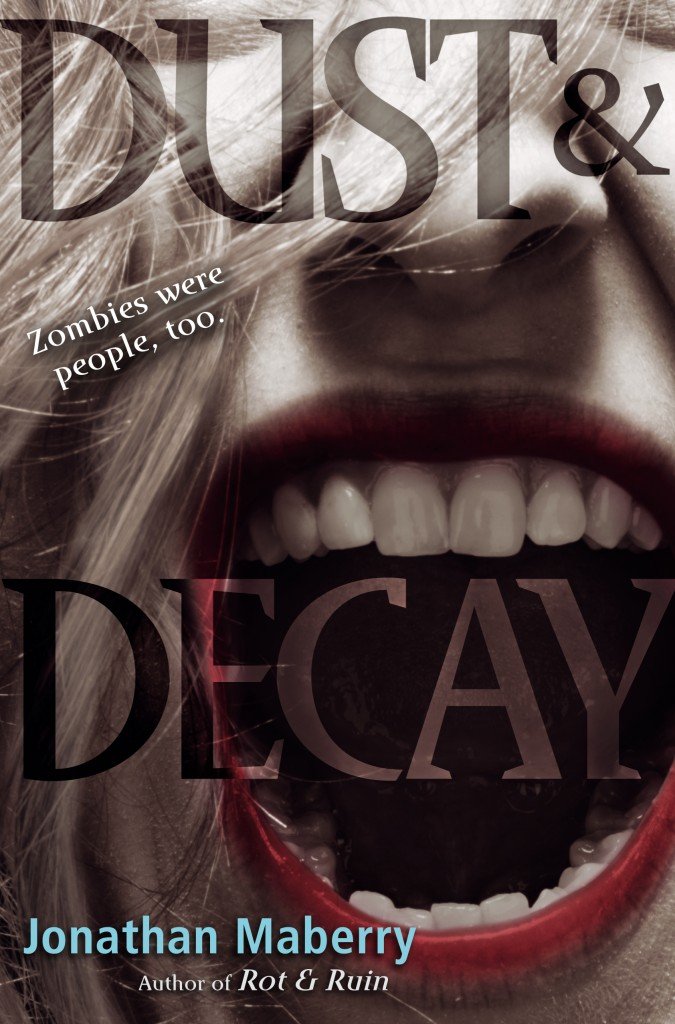 Six months have passed since the terrifying battle with Charlie Pink-eye and the Motor City Hammer in the zombie-infested mountains of the Rot & Ruin. It’s also six months since Benny Imura and Nix Riley saw something in the air that changed their lives. Now, after months of rigorous training with Benny’s zombie-hunter brother Tom, Benny and Nix are ready to leave their home forever and search for a better future. Lilah the Lost Girl and Benny’s best friend Lou Chong are going with them.

Sounds easy. Sounds wonderful. Except that everything that can go wrong does. Before they can even leave there is a shocking zombie attack in town. But as soon as they step into the Rot & Ruin they are pursued by the living dead, wild animals, insane murderers and the horrors of Gameland –where teenagers are forced to fight for their lives in the zombie pits. Worst of all… could the evil Charlie Pink-eye still be alive?

In the great Rot & Ruin everything wants to kill you. Everything…and not everyone in Benny’s small band of travelers will make it out alive.

Praise for Dust and Decay:

“Maberry knows this world well; when the zombie apocalypse comes down, I want him on my team.”
—Booklist

“Fans of Suzanne Collins’s Hunger Games will devour this.”
—VOYA

“The Good, The Bad and The Ugly” that’s how I describe this story it all unfolds like a Wild West Battle.

The GOOD is Tom Imura and his band of warriors Benny, Nix, Lilath and Chong.

THE BAD is White Bear and some other bad zombie hunters.

THE UGLY of course are the Zoms (zombies).

I have said it before Jonathan Maberry is really a masterful storyteller packing a punch across genres. Genre for genre a pound for pound a heavyweight contender for book awards. He has really knitted together a thrill ride of a story that is about more than zombies keeps you engrossed right to the end with love and war.

Benny is maturing and becoming a warrior he was no longer the skinny kid that he once had been he has muscle definition and six-pack abs. He has an eye also on one girl, will he be able to express his love to her?

Tom the powerful warrior equipped with his kami Katana, Tom the Swordsman, Tom of the woods, Fast Tommy. Tom the Killer.

Lilah is another hero fast efficient and ruthless she grew up out in the Ruin, she was raised by a man who helped her during the First Night and then was living on her own for years after. Lived alone in the woods spoke to no one. Learned from books and learned the art of making weapons. She became a hunter and a killer. She is quiet and very beautiful with eyes the colour of honey. They called her the Lost Girl on the Zombie cards. She was merely a legend or myth until Tom and Benny brought her out into the public eye.

Together they destroyed Charlie Pink-eye and the Hammer.

But did they really destroy Charlie?

That’s what they thought but a figure appears amongst the zoms that looks like Charlie from the distance, is it him?

If it is how could Benny tell Nix, a girl he loves, that her mothers murderer is still out there, still roaming the world free?

The band of warriors lead by Tom the hero Zombie Hunter set out on a journey to the Ruin in search of a Jet a mode of transport. They leave Mountainside and head for the Forest along there journey meet The Bad and the Ugly, they also meet many of their good friends, good Zombie Hunters. The Greenman is one of them a hunter who literally looks like a tree, he wears a leafed mask and has cones and leafs pinned to his coat, a camouflage amongst the forest in which the zoms cannot see him.

One good weapon to have against the zoms, is cadaverine. Consists of a mixture of cadaverine, putrescine, spermidine, and other vile ptomaines. They will not eat you if you have it smeared on you.

The journey places them into what could be debated as the greatest test some of their friendships have been under. A real nail biting experience as they become divided and some captured, love also flourishes in a story that really entertains with ingredients of courage and bravery.

White bear The Bad has a bounty on the heads of the good band of zombie hunters the four of them Nix, Benny, Lilah and Tom.

If you think all this is not enough to get you to read this novel, then hold on because Carpet coats, Football Helmets with Plastic Visors and a Pit in the ground are signs of danger!

The bets are on who will survive?

Gameland was a place that Lilah escaped in the past and was eventually closed down but now it has been reopened by White Bear and other Bad Zombie Hunters.

The Hunger Games is over for now until the movie is released and The Dust and Decay and The Gameland is a rightful dose of the same entertainment.

“Now Benny was fifteen and a half, and First Night was a million years ago. This world was no longer that world. On First Night the old world had died. As the dead rose, the living perished. Cities were incinerated by the military in a futile attempt to stop the growing armies of the dead. The electromagnetic pulses from the nukes fired all electronics. The machines went silent, and soon, so did the whole country. Now everything east of the small town of Mountainside was the great Rot and Ruin. A few other towns littered the foothills of the Sierra Nevada north and south of Benny’s home, but the rest of the old world had been consumed.”

“Before First Night the United States Census Bureau estimated that there were 6,922,000,000 people alive on planet earth. Tom said that news reports claimed that more than two billion people died in the first two days after First Night.

By the time the internet went down, the estimates of the global death toll were at four billion and climbing.

People in town believe that following first night more than six billion people died. Most people think the whole rest of the world is dead.

We know that the total population of the nine towns here in central California is 28,261 as of last new year’s census.”

“It was like a plague, but different from the one that had destroyed the world. This was an emotional pandemic that blinded the eye and deafened the ear and darkened the mind so that there simply was no world other than what existed inside each fenced town.”

Preacher Jack shrugged. “This world may be paradise for the Children of Lazarus, but to snot-nosed little sinners like you…this world is hell. How’s that for a cosmic paradox? Heaven and Hell coexisting out here in the Rot and Ruin, and the two of them forming a brand-new Eden. The towns-why, you might consider them limbo, where souls are just waiting for judgement. As for Gameland….now it would be God’s own truth to say that Gameland is purgatory. It’s where you have a chance to expunge your sins.”

“He took her hand, and they walked under the canopy of cool green leaves. Birds sang in the trees, and the grass beneath their feet glistened with morning dew. The first of the day’s bees buzzed softly among the flowers, going about their ancient and important work, collecting nectar and taking pollen from one flower to another. Cyclones of gnats spiralled up from the grass and swirled through the slanting sunlight. The loveliness of the forest was magical and fresh, but it was also immense. Neither of them spoke, unable to phrase their reactions to the rampant beauty and unwilling to trouble the air with the horrors that haunted their hearts.

Despite the warm reality of each other’s hands, they felt incredibly alone. Desolate. Even though they knew that Tom and Lilah and Chong were somewhere in this same forest, it was as if everyone else was on a different planet. Mountainside-home-was a million miles away. The jumbo jet could well have been on the far side of the world, or something from an old dream.”

READ MY INTERVIEW WITH THIS AUTHOR

Reviewed by Lou Pendergrast on 09 August 2011