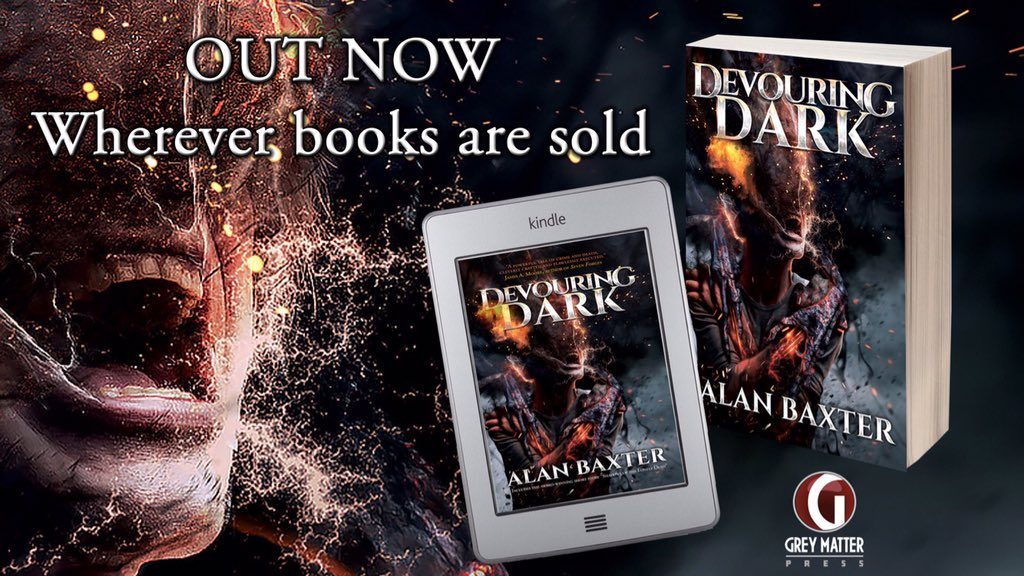 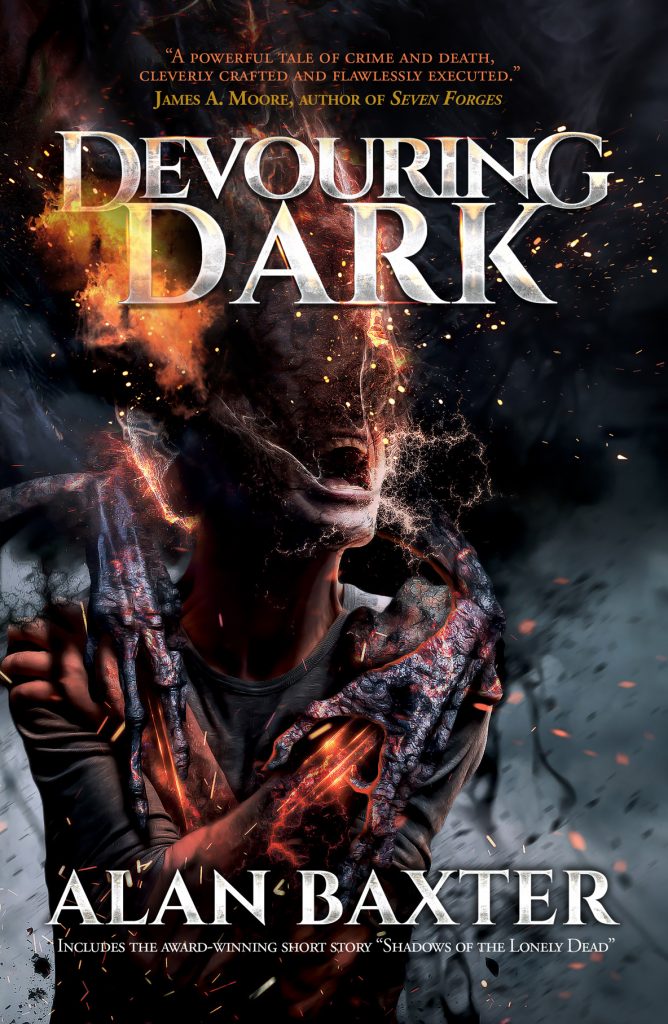 Matt McLeod is a man plagued since childhood by a malevolent darkness that threatens to consume him. Following a lifetime spent wrestling for control over this lethal onslaught, he’s learned to wield his mysterious paranormal skill to achieve an odious goal: retribution as a supernatural vigilante.

When one such hit goes bad, McLeod finds himself ensnared in a multi-tentacled criminal enterprise caught between a corrupt cop and a brutal mobster. His only promise of salvation may be a bewitching young woman who shares his dark talent but has murderous designs of her own.

Devouring Dark is a genre-smashing supernatural thriller that masterfully blends elements of crime and horror in an adrenaline-fueled, life-or-death rollercoaster ride that’s emblematic of the fiction from award-winning author Alan Baxter.

“Devouring Dark is a thrilling mix of crime and horror, a book that somehow defies either description yet embraces both. It moves like a juggernaut, thundering towards an intense, emotional conclusion. I devoured Alan Baxter’s dark; you should too.”
– Gary McMahon, author of Pretty Little Dead Things

“Devouring Dark is a powerful tale of crime and death, cleverly crafted and flawlessly executed. I’m a fan of Alan Baxter and Devouring Dark is a perfect example of why. Do yourself a favor and join me for some shivers.”
– James A. Moore, author of Seven Forges and the Serenity Falls Trilogy

As title mentions there is some devouring, and it is to do with a darkness, a void, a dark matter possession, succumbing, decay and death.
Administered by two characters, male and female, same gift shall we say but different application of it.
Small Scotsman, drinks occasional Laphroaig, lives in modest part of city of London, in Finsbury Park, in his one-bedroom basement flat, whilst in spare time, “trying to make sense of the blackness that swirled like ink in water through his skin,” and whilst on his atonement and vengeance road “The cost of his ability was getting higher, the hurt more intense and long-lasting.” He is a case of, “Dark attracts itself like iron filings to a magnet, mate” from his own words. Mr. Matthew McLeod Drives an old dark blue VW Golf hatchback, no love in his life, no siblings, “Matthew McLeod. A nobody warehouseman. Arrived in London from Edinburgh about a decade ago, same job and home for the last eight years. No record, no priors, no reason to matter to anyone.” That’s what Detective Sergeant Charlie Collins had on him in the beginnings of his investigation and through a small error he has come to be known by a few people that shouldn’t know of his ability, one person in particular a London a mobster, Vince Stratton landlord of Stratton’s.
He has troubles weighing him down, some really darkness of heart of the past decaying his soul and with this power in his hands, a gift, and a bane, as he anticipates his falling and demise he will take down many deserved of vengeance, a vigilante finding himself caught in a little web by a nasty gangster from town, one that has his hand in many pockets, and with his loved ones lives at stake needs to shut things down, even if it costs him his life.
There is one other with certain dark abilities an Amy Cavendish that gets caught in this web, she seems to have more grip on hers and a nurse so uses it with some idea of mercy and helping some and at the sometime killing of others that she feels need it.
The prose was clear and had right amount of scenes staying on form with no unnecessary bearing away from the storytelling.
It was an entertaining read with an interesting amalgamation of storytelling elements of noir, supernatural, and horror, that one may devour and enjoy.
A subterranean tale with shadows of justice manipulating death.

“Matt McLeod knew the old adage, that light is supposed to push away the darkness. But he also knew it wasn’t true. Light sits on top, like a film of oil on water. The dark is still there underneath, deep, permanent, waiting. And usually it’s enough, that surface skein of brightness, to keep a soul from the yawning black abyss below. But once the cracks appear, the fall is inevitable. And the darkness devours.”

“Matt winced at the word ‘fault’. So much in his life was his fault. So much was destroyed by his actions. He should have killed himself a long time ago and ended the prospect of further hurt to anyone, but he thought he’d been doing well. His atonement was actually having a positive effect on the world, however small that effect might be. But now this. “Fine.” He would have to think his way around the problem and find a way out. Meanwhile, he hopefully wouldn’t have to kill anyone too innocent. Whatever that even meant.”

“All those thriller novels she enjoyed, imagining herself at least as good as the protagonist, capable and powerful, taking on criminals and international organised crime, winning the day. Especially with her secret dark ability, something even Bond or Bourne couldn’t boast. And it turns out she couldn’t even track one man in one town. Life wasn’t like books and movies.”

“All the death he could possibly draw on wrapped itself around more of itself, made manifest, like gravity closing in around a collapsing star and taking everything away, folding in and in and destroying all within its boundary, nothing, even death itself, able to escape its event horizon.”

Reviewed by Lou Pendergrast on 06 November 2018
We use cookies to ensure that we give you the best experience on our website. If you continue to use this site we will assume that you are happy with it.Ok