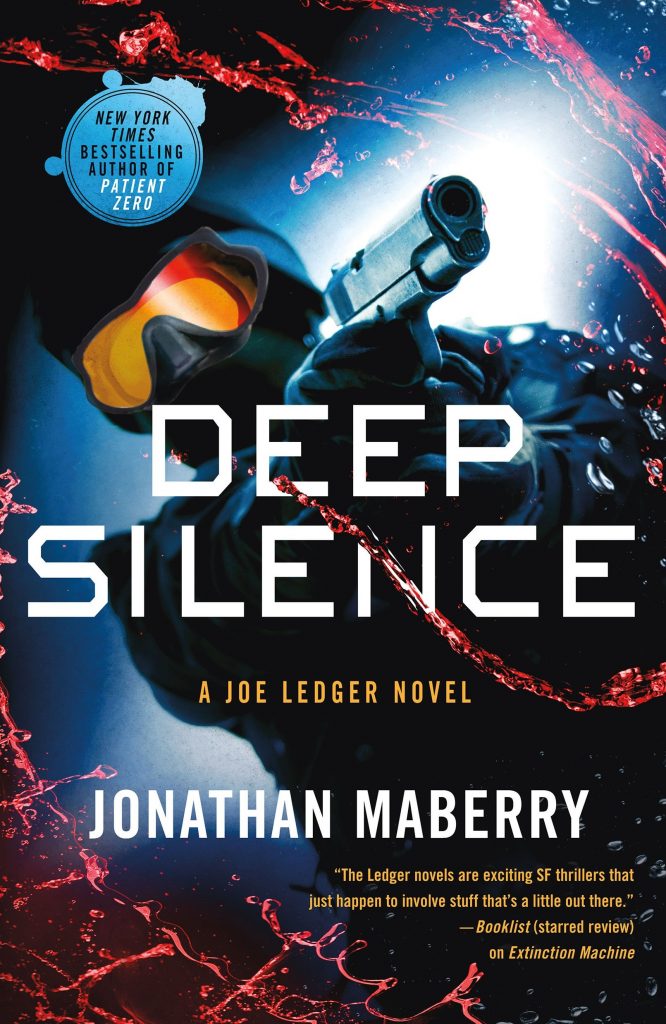 Terrorists-for-hire have created a weapon that can induce earthquakes and cause dormant volcanoes to erupt. One terrifying side-effect of the weapon is that prior to the devastation, the vibrations drive ordinary people to suicide and violence. A wave of madness begins sweeping the country beginning with a mass shooting in Congress. Joe Ledger and his team go on a wild hunt to stop the terrorists and uncover the global super-power secretly funding them. At every step the stakes increase as it becomes clear that the end-game of this campaign of terror is igniting the Yellowstone caldera, the super-volcano that could destroy America.

Deep Silence pits Joe Ledger against terrorists with bleeding-edge science weapons, an international conspiracy, ancient technologies from Atlantis and Lemuria, and an escalating threat that could crack open the entire Earth.

“Effortlessly blending cutting-edge science fiction, military action, and Lovecraftian horror into a memorable synthesis, Maberry delivers a story that starts strong and doesn’t let up until the end.”
–Publishers Weekly

Praise for the Joe Ledger Series:

“A fast-paced, brilliantly written novel. The hottest thriller of the New Year!”
–Brad Thor on The King of Plagues

“Wow! From the first page of Patient Zero you know you’re in the hands of a master.”
–M.J. Rose, bestselling author of The Reincarnationist

“The Ledger novels are exciting sf thrillers that just happen to involve stuff that’s a little out there.”
–Booklist, (Starred Review) on Extinction Machine

He was a cop, then a solider, and now still active as a special operative, but maybe only for so long, as this is the tenth and final instalment with Joe Ledger and Department of Military Sciences.
Kill Switch and Extinction Machine maybe his most traumatic cases, and Deep Silence is one of the most trying as DMS are up against earthquakes, mind control, green crystals, one powerful machine, and the destruction of America.
There is an interesting green crystal in this tale that is not kryptonite but has some menacing power.
A great tool Joe Ledger has is a MindReader, an instrument DMS use, that will make many wish and gift lists.
If you have been there from the beginning and a constant Joe Ledger reader you would be reading this installmnet without critic concern.
If this is your first delve into Joe Ledger then this will be a thrilling action packed intense read.
The chapters shift through timelines and they can take some getting used to, with patience this story plays out quite well.
Settle in and absorb the finale of Joe Ledger and DMS series.

“I’m a grown man, a skilled fighter, a practiced killer, and a special operator. But not at that moment. In that moment I was very young, and very small, and there were monsters. Not in my closet or under my bed, but in my dreams. In my head.”

“It is a statement of fact. The DMS exists to be a first line of defense against terrorist threats involving radical technologies. We are uniquely qualified to handle such threats, and we are structured to be a rapid-response unit. There is no other organization within the United States government that can do what we do. Not in the intelligence community nor the military. To remove us would be to expose this nation to grave threats.”

Reviewed by Lou Pendergrast on 23 October 2018
We use cookies to ensure that we give you the best experience on our website. If you continue to use this site we will assume that you are happy with it.Ok