The Dark Net by Benjamin Percy

The Dark Net by Benjamin Percy 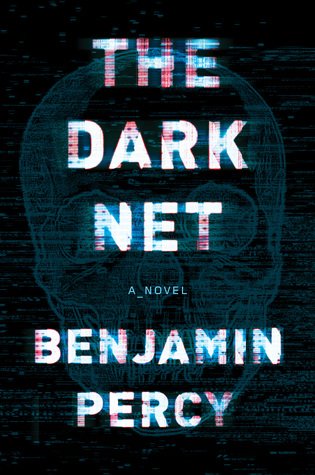 “Percy takes the darkest conspiracy theories you can imagine and makes them the stuff of nightmares….humankind is held responsible for its irresponsibility, paying the price for all the convenience we take for granted, for our obsession with the digital world…the message is effective and scary…there’s something undeniably creepy about the thought that your smartphone can possess you. A gory cautionary tale.”
— Kirkus

“Benjamin Percy’s distinctive brand of horror fiction…is on full display in The Dark Net. The novel blends aspects of techno-thrillers with supernatural horror for page-turning results. Percy is no stranger to unlikely genre fusions, but The Dark Net’s idiosyncratic brew is particularly enticing.”
—Shelf Awareness

“Written in vivid, often lyrical prose, but with exhilarating comic-book energy, THE DARK NET is a megawatt defibrillator to the reader’s heart. Quirky but very human characters confront an explosive emergence of the supernatural into our world, in this imaginative, spooky, swiftly paced tale threaded through with dark humor.”
— Dean Koontz

“THE DARK NET kicked my ass with its deft mash-up of both blackhat hacker culture and black magic. Percy reveals an upgraded, rebooted battle between good versus evil — a fast, fantastic, throat-punch of a read.”
— Chuck Wendig, NYT bestselling author of Blackbirds and Zer0es

“Benjamin Percy’s THE DARK NET channels the spirit of your favorite sprawling and epic, 1980’s horror/thriller novels into a tightly paced, nasty, unrelenting 21st century nightmare. An addictive and frightening read.”
— Paul Tremblay, author of A Head Full of Ghosts and Disappearance at Devil’s Rock

“Beautifully written, as extravagant as the night sky but way more cool, The Dark Net demonstrates Benjamin Percy’s soft-footed yet industrial-strength imagination, storytelling mastery, deep curious infatuated humanity, and his total willingness to throw himself off one narrative cliff after another. This is horror literature’s bebop, bold, smart, confident in its capacity to redefine its genre from the ground up. Read this book, but take a firm grip on your hat before you start.”
—Peter Straub

You seen all these and then you will be prepared for this tale.
This author upon the page has created something that may bleed into the world, a take over of sorts, la Porte dell’inferno unleashed.
Midway, the momentum, the author, has you in his vice, and in a triage of thrill, horror and mystery, the sum of all fears contained within, many layers of darkness contained within these pages.
There are two hearts that are memorable within, Hannah a young special girl and Hemingway a courageous floppy-eared German Shepherd.
It’s fall, and in Portland, October 31st is fast approaching with echoes of Dan Brown and Stephen king, Benjamin Percy, the author, has really delivered a great supernatural tale of urban legends, just be rooting for the good guys whomsoever they may be.
Please roll out the tv or movie adaptions, screenwriters and directors.

“Cyberspace was a whirling codex, a living infinite.”

“Right now there are thousands of transmissions streaming through our bodies. Emails, phone calls, text messages, Wi-Fi and radio and television signals. Right now there are billions of particles of dark matter swirling through this very room, millions of bacteria creeping across her hand, and she can’t see any of it. Right now there are thousands of smells that her dog perceives and she does not. Is it that much of a reach to believe that other forces might surround her? Not anymore. Not after what she has witnessed. This isn’t about chasing a story anymore. The story has found her. She is living the story. She is the story. Letters on a page don’t matter. Deadlines mean nothing. For the first time in a long time, she feels a singularity of focus. She isn’t researching old files and she isn’t dreaming up future headlines. She is firmly lodged in the blurred-edge present, where she is being hunted and her sister and niece are in danger because of it.”

Read Interview from 2013 with the author @ https://more2read.com/review/interview-with-benjamin-percy/