The Child Finder by Rene Denfeld 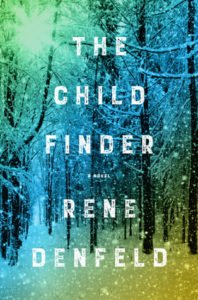 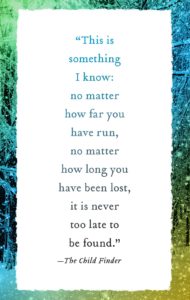 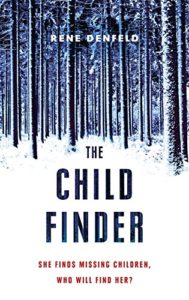 The Child Finder by Rene Denfeld

“A darkly luminous story of resilience and the deeply human instinct for survival, for love. Blending the magical thinking of childhood, of fairy tales, dreams, memories and nightmares, The Child Finder is a terrifying and ultimately uplifting novel that demands to be consumed and then once inside you–lingers….” (A.M. Homes, author of May We Be Forgiven)

“Rene Denfeld has a gift for shining bright light in dark places. The Child Finder is a gorgeous, haunting gem of a novel. Raw and real yet wrapped in a fairy tale, as lovely and as chilling as the snow.” (Erin Morgenstern, New York Times bestselling author of The Night Circus)

“Naomi imagined a five-year-old girl, lost and shivering, wandering in what must have seemed like an endless forest. Madison Culver had been missing for three years. She would be eight years old by now—if she had survived.”

“Where are you, Madison Culver? Flying with the angels, a silver speck on a wing? Are you dreaming, buried under the snow? Or is it possible, after three years missing, you are still alive?”

“You were born of the snow, her mind told her. Born of the beauty.”

Off in the woods today…. a fairytale unlike any other, in the woods lurks…. something.. rotten.
A story of survival and being found by the child finder Naomi.
Skills of hunting and tracking for food learnt, whilst others are being skinned for foods, animals that is,
but nothing else, no love learnt in the woods, no fairytale.
A girl who forgets mummy for a time, she had to become the snow girl, she had to survive, to cope, she had to step out of herself into a fairytale to survive, into another dimension, even though maybe she didn’t even know she was, when did she in inhabit this and when will she waken from it?
The whys of the whole missing unravelled, all make compelling reading.
A vivid tale with all the sense of place evoked in reading, sense of snow and wilderness and the darkness within it, visceral and empathic, surreal but real in the desperation and need for finding, for the finder and the child, to be found.
Not just mystery and thrill contained within, a lot more at work in this tale psychologically, layered with good craftsmanship, lucid and poetic at times of which this a literary tale also.
Maybe the reader will be anticipating more child finding from Naomi the child finder and, the author, Rene Denfield might just be forming new works, new cases, I hope we do read more.

It was the contradiction of her life, Naomi knew, that she was suspicious and trusting, afraid and fearless—and, most importantly, often at the same time.

Her entire life she had been running from terrifying shadows she could no longer see—and in escape she ran straight into life. In the years since, she had discovered the sacrament of life did not demand memory. Like a leaf that drank from the morning dew, you didn’t question the morning sunrise or the sweet taste on your mouth.
You just drank.

The snow girl knew about fairy tales. In those tales children ate poison apples and fell asleep for years; they rubbed stones and made wishes and turned into beasts; they drank tea and became small; they fell down tunnels and woke in lands ruled by mad hatters and benevolent kings. There were children who were created from mud, rolled from dough—or born of ice. Maybe, snow girl thought, she had fallen down a magic tunnel and arrived in this place. Maybe she was freshly created herself, rolled of snow and made of wishes.

Mr. B knew everything there was to know about animals. He knew how to find tiny tracks under the brush. He could read the flight of the hawks over the places where the animals hid. He knew where the snow was pockmarked with delightful holes under which he would find warm carcasses of meat and blood.
The girl learned that the trap lines he set followed the lives of the animals, not just from season to season but along with weather. She learned to recognize the soft cunning fox, the sleek marten, the ever-present skunk, the sharp coyote, and the distant, howling wolf. She learned to identify the yellowing marks of telltale urine, the soft dimpled snow over a dug burrow. The heat of scat as it buries itself, the clue of a few hairs caught in a branch, the musky smell of an animal in the far distance.

You are missing out, Naomi, he thought, sitting at the bedside. You are finding your children, but you are not finding yourself. You are not sitting at the bedside.
He didn’t blame Naomi. He admired her strength, her spirit. But he saw Naomi as the wind traveling over the field, always searching, never stopping, and never knowing that true peace is when you curl around one little piece of something. One little fern. One little frond. One person to love.

One sleepy Sunday a woman came into the battered women’s shelter, distraught about her missing daughter. That was the day Naomi discovered what she was meant to do. Within a few years she was working nonstop. She sought out trainings along the way, from records gathering to crime scene analysis, and became licensed as a private investigator. She met other investigators, discovering they specialized in everything from cheating spouses to white-collar crime to insurance fraud, all the way up to murder cases and exonerating the innocent. Naomi was the only one she knew about who specialized in finding missing children. Soon people began calling her the child finder.

Over the years she had taken classes run by retired police; had completed an intensive course with a Filipino street fighter; and, in her favorite experience, had flown to Mexico to train with a professional boxer retired to glory after a life of dirty fighting.

Reviewed by Lou Pendergrast on 05 September 2017
We use cookies to ensure that we give you the best experience on our website. If you continue to use this site we will assume that you are happy with it.Ok