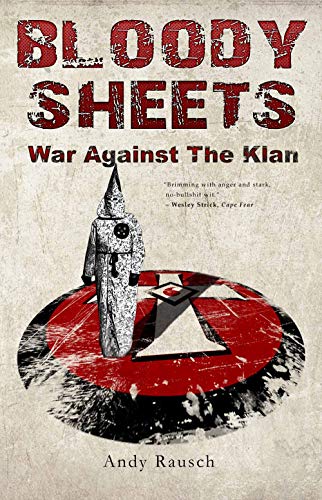 When a young black man is lynched in a small Alabama town, his estranged father — a crime world enforcer — sets out for revenge, embarking on a blood – soaked journey that will leave the ravaged bodies of dead Klansmen in his wake.

“Rausch unleashes a flurry of gut-punches both painful and thrilling, his prose brimming with righteous anger and stark, no-bullshit wit. This racially charged and crackling tale reads like a startling mash-up of Jim Thompson and Iceberg Slim, making Bloody Sheets that rare achievement: hardboiled and hard-hitting, but transcendently heartfelt as well.”
– Wesley Strick, screenwriter of Cape Fear.

“Andy Rausch’s prose is passion filled rage incarnate. ‘Bloody Sheets’ is a must read revenge tale, drenched in catharsis and blood. The dialogue is lively and energetic, full of just the right balance of humor and hate. It shows the timeless tragedy of racial injustice in America that’s been present for centuries and it does something about it. ‘Bloody Sheets’ tackles America’s racial divide with the same composure and intensity of recent works like ‘Get Out.’”
– Billy Chizmar, author of Widow’s Point.

“Bloody Sheets by Andy Rausch is a violent and powerful crime drama choc-full of great characters and crackling dialogue.”
– Paul D. Brazill, author of A Case of Noir.

This tale starts with two mentions and sentences:

In memory of Emmitt Till

Be peaceful, be courteous, obey the law, respect everyone; but if someone puts his hand on you, send him to the cemetery.
— Malcolm X

With that in mind there will be terrible things contained within, human horrors, abominable words, bad language, bad men, violence, corruption, more love needed amongst mankind in this tale.

By any means necessary two characters, in Gibson Alabama, just can’t stand the injustice of it all, and with blood pumping, temperature rising, that old rage and anger within riseth, a pair of men are wanting vengeance for a murdered son on a brain trails explosive ride to take down individuals.
There were twenty, then there was nineteen, will there be none?

No Nobel Peace Awards handed out this time around, it gets the grit award for terrible tragedies of the human race featured in fiction. Delivered as many hard-boiled tales that came before it, short sharp shocking prose and dialogue to the meat of the conflict and tragedy with memorable tragic effectiveness.

Reviewed by Lou Pendergrast on 23 March 2019