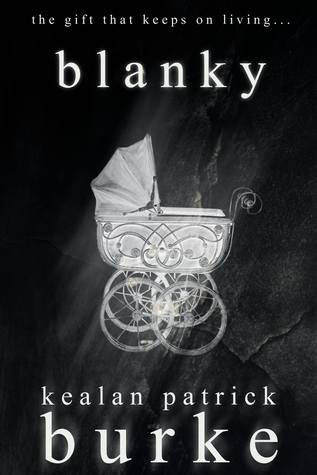 In the wake of his infant daughter’s tragic death, Steve Brannigan is struggling to keep himself together. Estranged from his wife, who refuses to be inside the house where the unthinkable happened, and unable to work, he seeks solace in an endless parade of old sitcoms and a bottle of bourbon.

Until one night he hears a sound from his daughter’s old room, a room now stripped bare of anything that identified it as hers…except for her security blanket, affectionately known as Blanky.

Blanky, old and frayed, with its antiquated patchwork of badly sewn rabbits with black button eyes, who appear to be staring at the viewer…

Blanky, purchased from a strange old man at an antique stall selling “BABY CLOSE” at a discount.

The presence of Blanky in his dead daughter’s room heralds nothing short of an unspeakable nightmare that threatens to take away what little light remains in Steve’s shattered world.

Because his daughter loved Blanky so much, he buried her with it.

“I am in awe of his talent” – Bentley Little, author of THE STORE, THE POLICY, and THE HOUSE.

“BLANKY is an outstanding work, filled with macabre details and breathless scenes of “witchy” suspense and dread. An epistolary-style touch at the conclusion of the novella only adds to its brilliance.” – MORBIDLY BEAUTIFUL

“…an emotional, literary work of art…BLANKY is another spectacular tale from Kealan Patrick Burke.”  – HORROR AFTER DARK

“Burke demonstrates that he belongs to that select group of horrorauthors that have a deep understanding of economy of language and haverefined the art of delivering a devastating punch in a limited space.” – HORROR TALK

“You say you can’t imagine what it must be like to lose a child.
Let me make it easy for you.
It’s the beginning of the end of your world.”

This tale is told through Steve Brannigan, a father and husband, whilst going through all that comes with loss and grief of a young child, he will have his time in this tale to scream and recoil at an unwanted malevolent innocuous and insidious presence.
Initially he undertook to repair his marriage after such tragic loss brick by brick, then something tragic happened, spiralling into something comparable to madness and a dreamlike nightmarish existence.
Why? And How?
Two questions hooking you with all that comes with this tragedy before the character, coupled with some nice sentences on loss, grief, reflections on a life past and things learned, all in the framework of horror writing.

“Positive reinforcement to counter negative experience, because ultimately, nobody wants to face the bad things alone.”

“Blanky. Such an innocuous name for something that had now cemented itself as the locus of my grief and horror and rage.”

“I had seen….and the gruesome scene in which….played the starring role had been nothing more than the mad product of stress and hope and grief and despair, a subconscious mural meant to make sense to no one. A strange one-act play in the theater of dreams.
But now….”

“I may have lost my mind for a time, but grief makes everyone crazy. Losing someone makes you lose yourself, makes you yearn for the impossible: one more day with the lost, an end to the pain, a cure for the spiritual malaise that eats you alive every morning you wake up alone. It makes you believe in wishes and other places.
In suicide.”

A new novella from the Bram Stoker Award-Winning author of SOUR CANDY and KIN.

Born and raised in a small harbor town in the south of Ireland, Kealan Patrick Burke knew from a very early age that he was going to be a horror writer. The combination of an ancient locale, a horror-loving mother, and a family full of storytellers, made it inevitable that he would end up telling stories for a living. Since those formative years, he has written five novels, over a hundred short stories, six collections, and edited four acclaimed anthologies. In 2004, he was honored with the Bram Stoker Award for his novella The Turtle Boy.

Kealan has worked as a waiter, a drama teacher, a mapmaker, a security guard, an assembly-line worker at Apple Computers, a salesman (for a day), a bartender, landscape gardener, vocalist in a rock band, curriculum content editor, fiction editor at Gothic.net, and, most recently, a fraud investigator.

When not writing, Kealan designs book covers through his company Elderlemon Design.

A number of his books have been optioned for film.

Visit him on the web at www.kealanpatrickburke.com.

Reviewed by Lou Pendergrast on 28 February 2019