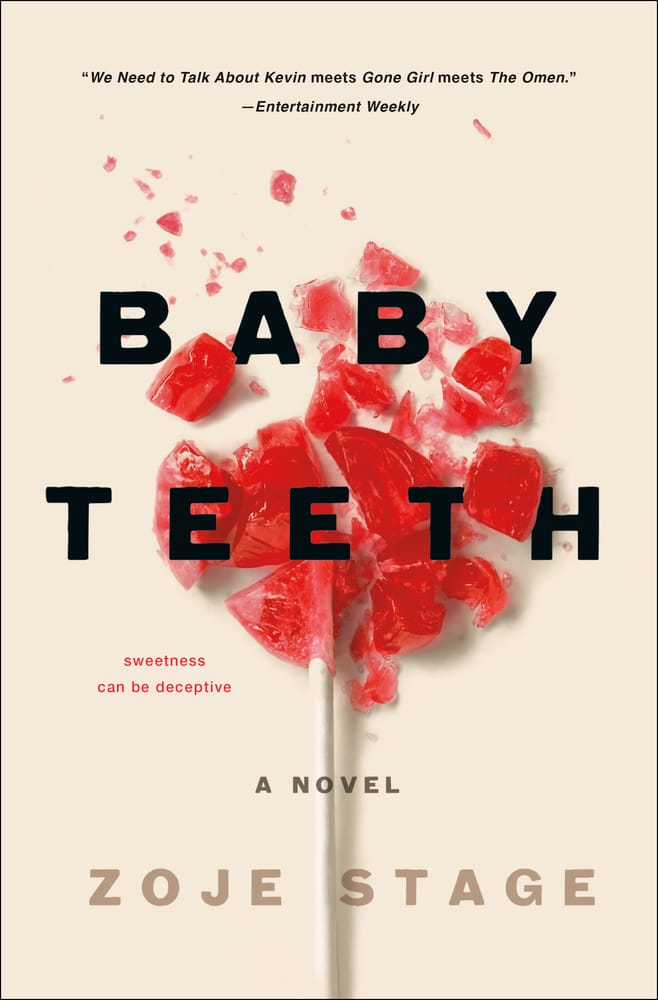 A battle of wills between mother and daughter reveals the frailty and falsehood of familial bonds in award-winning playwright and filmmaker Zoje Stage’s tense novel of psychological suspense, Baby Teeth.

Afflicted with a chronic debilitating condition, Suzette Jensen knew having children would wreak havoc on her already fragile body. Nevertheless, she brought Hanna into the world, pleased and proud to start a family with her husband Alex. Estranged from her own mother, Suzette is determined to raise her beautiful daughter with the love, care, and support she was denied.

But Hanna proves to be a difficult child. Now seven-years-old, she has yet to utter a word, despite being able to read and write. Defiant and anti-social, she refuses to behave in kindergarten classes, forcing Suzette to homeschool her. Resentful of her mother’s rules and attentions, Hanna lashes out in anger, becoming more aggressive every day. The only time Hanna is truly happy is when she’s with her father. To Alex, she’s willful and precocious but otherwise the perfect little girl, doing what she’s told.

Suzette knows her clever and manipulative daughter doesn’t love her. She can see the hatred and jealousy in her eyes. And as Hanna’s subtle acts of cruelty threaten to tear her and Alex apart, Suzette fears her very life may be in grave danger…

One of Entertainment Weekly’s Must-Read Books for July
People Magazine’s Book of the Week
“Gripping” —InStyle
“Propulsive.” —New York Times Book Review
One of Bustle’s “Fifteen Books With Chilling Protagonists That Will Keep You Guessing”
“A wholly original and terrifically creepy story.” —Refinery29
One of PopSugar’s “25 Must-Read Books That Will Make July Fly By!”
A Barnes and Noble Blog Best Thriller for July!
One of the “Biggest Thrillers of the Summer” —SheReads
“Summer 2018 Must-Read” —Bookish
“Best Summer Reads for 2018” —Publishers Weekly
“One of 11 Crime Novels You Should Read in July” —Crime Reads
“A twisty, delirious read” —EntertainmentWeekly.com
“New & Noteworthy” —USA Today
“A deliciously creepy read.” —New York Post

“Unnervingand unputdownable, BABY TEETH will get under your skin and keep you trapped in its chilling grip until the shocking conclusion.” — New York Times bestselling author Lisa Scottoline

“We Need to Talk About Kevin meets Gone Girl meets The Omen. Baby Teeth is a twisty, delirious read that will constantly question your sympathies for the two characters as their bond continues to crumble.” — Ew.com

“Deliciously creepy…the author keeps the suspense taut…offering a terrifying glimpse into the inner thoughts of a budding sociopath.” — Library Journal

“Zoje Stage’s Baby Teeth is cunning, sharp, and nasty, and wickedly funny until it isn’t funny anymore. This intelligent, unrelenting, layered shocker can stand proudly alongside classics like The Other and The Butcher Boy, with their ‘evil’ children uncannily reflecting our own sins.” —Paul Tremblay, nationally bestselling author of A Head Full of Ghosts and The Cabin at the End of the World

“Every time we read the premise of Baby Teeth, all the hair on the back of our neck stands up. Simply put, it’s about a sweet little girl who wants to kill her mother. And it. Is. Bonkers. Do you have goosebumps yet?” — HelloGiggles

“Imagine WE NEED TO TALK ABOUT KEVIN only with insight into what Kevin was thinking–and if Eva had fought back. This dark, terrifying novel unfolds as a battle of wits between a struggling mother and her psychotic young daughter–and its genius is that the reader’s allegiance isn’t allowed to linger too long on either side. You’ll be desperate to discuss the ending once you’ve recovered from the shock of it. A must-read.” —Catherine Ryan Howard, USA Today bestselling author of Distress Signals

“Baby Teeth is electrifyingly creepy. It calls to mind the great monster children of The Fifth Child or We Need to Talk About Kevin, but has a devilish tension all its own. Twisted, playful, and deeply unsettling, Zoje Stage’s debut announces her as a new voice worth celebrating.”– Colin Winnette, author of The Job of the Wasp

“Baby Teeth is deeply unsettling in the best possible way. Absolutely unforgettable and unflinching, it digs right into the painful nerve of family, obligation and dependence–it’s a hell of a debut.” — Kelly Braffet, author of Save Yourself

“Unnerving and unputdownable, Baby Teeth will get under your skin and keep you trapped in its chilling grip until the shocking conclusion.”— New York Times bestselling author Lisa Scottoline

Hanna, that innocent mask, the seven-year-old daddy’s little girl, who felt all the time within with her terrible plans and behaviour, felt of mommy as, “Bad, bad Mommy.”
She would try to create another self, a character that she would envision that would cast spells that would make Mommy’s heart explode.
Maybe there was some badness in mummy not wanting the presence of her daughter in her life, the handful she became, but as soon as she was able to, daughter Hanna would be playing with mummy and daddy, in all sorts of ways, manipulation to the max into an oblivion.
The hook in the tale is what does daddy’s girl achieve, does she rid mummy from her life?
Parenting, wonderful, that stuff of dreams, turned upside down in this narrative.
It’s all creepy and twisted succumbing the reader in its eeriness and uncomfortable captivating formation of events.

“Hanna kept her words to herself because they gave her power. Inside her, they retained their purity. She scrutinized Mommy and other adults, studied them. Their words fell like dead bugs from their mouths. A rare person, like Daddy, spoke in butterflies, whispering colors that made her gasp. Inside, she was a kaleidoscope of racing, popping, bursting exclamations, full of wonder and question marks. Patterns swirled, and within every secret pocket she’d stashed a treasure, some stolen, some found. She had tried, as a little girl, to express what was within her. But it came out like marbles. Nonsense. Babbling. Disappointing even to her own ears. She’d practiced, alone in her room, but the bugs fell from her mouth, frighteningly alive, scampering over her skin and bedclothes. She flicked them away. Watched them escape under her closed door.
Words, ever unreliable, were no one’s friend.”

“We’ve tested her for everything. Her hearing’s fine, no muscle weakness, no cognitive problems. I’ve lost track of all the tests, but she takes them, seems to think they’re fun—but she won’t say a word.”

Reviewed by Lou Pendergrast on 11 August 2018
We use cookies to ensure that we give you the best experience on our website. If you continue to use this site we will assume that you are happy with it.Ok